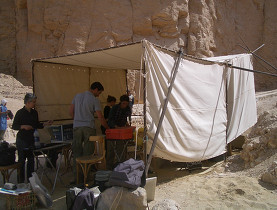 Tomb without a view: the archaeologists at work in the Valley of the Kings (swissinfo)

by Fatiha Temmouri, Valley of the Kings, swissinfo.ch

A Swiss team has uncovered a mummy in Egypt’s Valley of the Kings – the first of its kind since the exhumation of Tutankhamen in 1922.

The Valley of the Kings is like a Holy Grail for Egyptologists. Situated on the west bank of the Nile, opposite Luxor, it is the burial site of many pharaohs and members of royal families or powerful nobles of the Egyptian Empire.

It was here, in 1922, that the most famous discovery in the history of Egyptology was made: the tomb of Tutankhamen, which until now has been the only intact example of its kind.

The latest find, which has created quite a stir, began on January 25, 2011, as part of clean-up work by a team of researchers from Basel University.

“On this famous January 25, we were cleaning a previously discovered tomb,” Susanne Bickel, professor at Basel University and head of the Swiss archaeological team, told swissinfo.ch.

Bickel said they first thought they were dealing with rubble or an unfinished building.

“Imagine our surprise when we realised it was probably another tomb. We’d never have thought two tombs could be so close to each another.”

But initially the find remained in the sand. At the beginning of 2011, Egypt was in full revolution; rumours of pillaging spread. Out of concerns for their safety, the team returned to Switzerland. A metal cover was placed over the opening to the tomb and the experts waited for a more favourable time to go exploring.

IntactThis turned out to be January 2012, when the team received official authorisation from the Egyptian authorities to carry on with the excavation.

“We were in a hurry to find out what was in the tomb,” Bickel said. “It took us four days to cross a well shaft. We managed to slide an arm in to take some photos with a camera. We saw an untouched tomb and a sarcophagus which was completely intact – unlike most of the ones we usually see.”