Religious Bigotry and Masses: Do Not Underestimate the Problem

Pakteahousenet: By Raza Habib Raja: Once again Pakistan has witnessed merciless killings which are sectarian in nature.  A few days ago, killers stopped a bus enroute to Gilgot, picked out those belonging to the Shiite faith and killed them mercilessly. The killing despite making international and domestic headlines nevertheless did not attract much condemnation from the Pakistani public. 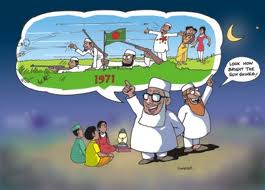 It is often said that ordinary Pakistani is nether religious nor is inspired by religious bigotry. Often this argument is supplemented by referring to electoral results which have generally shown that moderate parties like PPP, PML (N), ANP and MQM take the bulk of the votes. I have read and heard for the zillionth time that religious parties do not get votes. Intellectuals supportive of PPP continously cite PPP as some kind of a bulwark against extremism and try to create this impression that as long as their favourite  party is getting the bulk of votes, Pakistan remains largely free of extremism and also of religious bigotry. Another stance which I have seen being repeatedly taken is that while middleclass is plagued by all the problems with respect to extremism, bigotry and reactionary tendencies, masses by and large make “smart” choices and select “progressive” parties.

I think this dissection of the issue is overly simplistic. People may not be voting for religious parties but will nevertheless be sensitive to some of the issues which these parties try to project in the public sphere. For example, a person may be a voter of PPP or PML (N) and yet be in agreement with the current anti blasphemy law. This is in fact one of the reasons as to why literally NO party has taken a clear position about repealing the law. It is just not the clergy’s opposition which is preventing these parties. The fact is that their own electorate also holds the same point of view on issues like  anti blasphemy law and status given to the Ahmedis through second amendment (which by the way was passed by the Parliament).