It is rare to see movie theatres packed in the middle of a workday, but that’s what happened Thursday (February 16th) in Istanbul when the much anticipated movie “Fetih 1453” (Conquest 1453) was released in theatres at the appropriate hour of 14:53.

With a 29.7m lira budget (12.9m euros), the highest in Turkish film history, the movie recounts Sultan Mehmet II’s conquest of Constantinople at the head of the Ottoman Army in 1453, a major turning point in world history.

The film opens with words attributed to the prophet Muhammad. “Verily, one day Constantinople will be conquered. What a wonderful commander is he who conquers it, what a wonderful army will his army be!”

In production for more than two years, the film is considered a combination of combat action and Ottoman triumphalism.

“As moviemakers, we are creating something imaginative. Especially in this case, shooting a movie on the conquest of Istanbul, which opened up a new era in world history, was a dream in itself,” Silva Delioglu, co-director of the movie, explained to SETimes.

Her expectation is that, as a movie prepared in line with Hollywood standards, it will have global impact.

Indeed, when the film’s trailer was released months ago it caused uproar. Many Greeks and Christians branded the movie as provocative and called for a boycott. The Greek weekly To Proto Thema described the film as “conquest propaganda by the Turks”.

“The Turkish invaders present themselves as masters of the world,” the paper said, adding that “the movie fails to show the mass killings of Greeks and the plunder of the land by the Turks.”

Janet Baris, a film critic from Agos Daily, told SETimes the reason for such reactions.

“Usually, historical movies feed nationalistic feelings in any given country. Because of this, instead of being objective, they highlight sensitivities in society. On the other hand, they also provide an opportunity to remind and re-discuss historical phenomena at the international scale.”

Film critics in Turkey have highlighted the greater significance of shooting epic movies like “Fetih 1453” in order to start talking about Turkey’s history. “Only then will we all be able to shoot good epic movies telling about the enmity between nations in the past without undermining the peace we have preserved today,” noted columnist Engin Ardic in the daily Sabah on January 13th. 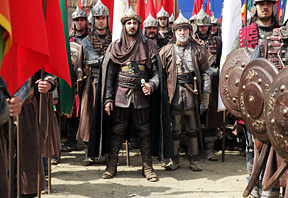