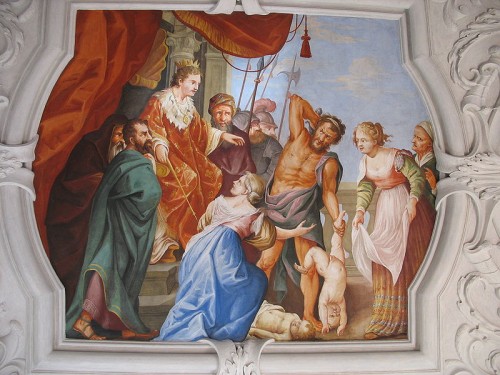 Fresco of the Judgment of Solomon (Courtesy: Wikipedia)

The Judgment of Solomon refers to a story from the Hebrew Bible in which King Solomon of Israel ruled between two women both claiming to be the mother of a child. It has become a metaphor referring to a wise judge who uses a stratagem to determine the truth, tricking the parties into revealing their true feelings. Specifically, the judge pretends that he will destroy the subject matter of a dispute, rather than allowing either disputing party to win at the expense of the other.

The story is recounted in 1Kings 3:16-28. Two young women who lived in the same house and who both had an infant son came to Solomon for a judgement. One of the women claimed that the other, after accidentally smothering her own son while sleeping, had exchanged the two children to make it appear that the living child was hers. The other woman denied this and so both women claimed to be the mother of the living son and said that the dead boy belonged to the other.

After some deliberation, King Solomon called for a sword to be brought before him. He declared that there is only one fair solution: the live son must be split in two, each woman receiving half of the child. Upon hearing this terrible verdict, the boy’s real mother cried out, “Please, My Lord, give her the live child—do not kill him!” However, the liar, in her bitter jealousy, exclaimed, “It shall be neither mine nor yours—divide it!” Solomon instantly gave the live baby to the real mother, realizing that the true mother’s instincts were to protect her child, while the liar revealed that she did not truly love the child. The reputation of the king greatly increased when all the people of Israel heard of this wise judgment.

However, in the time of Solomon in the seventh century BC, in Judaism of his time, there was no distinction between the sacred and the profane.  This lack of separation of the Temple and State or Synagogue and State in Judaism should become fairly apparent from a quick reading of some of the verses of the Old Testament.  If any one doubts this premise, let me suggest the reading of a short article Violence in the Bible and Jihad in the Quran.  King David was a ruler and his son Solomon was not only a king, a prophet, a writer but also a judge as depicted in the picture above.  Unlike Judea our planet has changed into a pluralistic society, a global village, with a population of seven billion, which is constantly buzzing with interaction. Two billion Christians are interacting with 1.5 billion Muslims, a billion Hindus, half a billion Buddhists and 15 million Jews, in discussion forums, social media and chat rooms.  Not to mention millions of agnostics and atheists among their ranks, some enjoying listening to Christmas carols and others not knowing what carols mean.  Yet each religious person is carrying a world view, which in some if not many ways, denies the world view of others, so something got to give.  All countries are signatory of the Universal Declaration of Human Rights which shrines the human dignity and religious freedom of all of us, but almost all countries are violating these rights in some sense by maintaining certain laws that favor the religion of the majority.  So, let me now catalog a few of these violations in different countries of the world.

Right wing political parties in almost all countries, including India and USA, are claiming special rights or a metaphorical first born child, for religious majorities, even in the sphere of governance and state. All the political movements to introduce Sharia laws, the Cairo declaration and the blasphemy laws in the so called Muslim countries are prime examples of similar violation or lack of Solomonic wisdom.  The mention in the constitutions of Pakistan, Afghanistan and Iraq, putting the unknown understanding of the Quran above the agreed upon constitution, is only a time bomb in the hands of the zealots to be exploited at a suitable time.  Bharatiya Janata Party (BJP) in India has introduce anti-conversion legislation in several states, according to U.S.-based human rights group, International Christian Concern (ICC).  Laws against denying holocaust are in a way thought police, denying freedom to think and recent discussion of Naqba laws are immediate examples from Israel.  Holocaust denial laws also exist in Christian countries.  Whether USA can elect the first Mormon President, after 200 years of her history may be tested in the present election cycle.  Each religious group is calling for the right of her child and declaring the metaphorical children of other religious groups illegitimate.

The matters of personal status such as marriage and divorce come under the jurisdiction of the religious tribunal system, in several countries, including in Israel and India and that may be reasonable.  However, in our global village it will post the natural question, how long can polygamy be denied to the people of Utah, if the Indian and Israeli model is correct?  Scores of such questions have risen with the coming together of humanity from different traditions and they invariably relate to the spheres of influence of religion and state.  Another provocative question that I may mention here is whether it is reasonable to question Islam and put it on trial, every time a Muslim does something wrong and not extend the same treatment to Judaism, Christianity or atheism?

How would Solomon have threatened all these proclaimed children by different religious groups to restore universality and sanity in our global village? This is the billion dollar question!  I have no doubt that each one of us needs Solomonic wisdom to first understand for ourselves and then establish Separation of Mosque-Church-Synagogue and State in our countries and religious societies, this requires flexibility of thought relevant to our present day ground realities.

Each one of us needs to order a Solomonic sword and cut the reality in our minds into two, one is the sphere of influence of our religion and other of state, wherein we need to coexist with fellow humans coming from all different religions, who want equal human rights and human dignity.  The sphere of religion needs to be as separate from the sphere of state or government as possible.  However, both spheres will influence each other as there is no denying that many of our so called secular laws have come from Islamic and Judea-Christian traditions.  We can draw inspirations from our scriptures about social, financial, judicial and other institutions of our state but they can be implemented only through the civic process and not merely on religious authority, while respecting human equality shrined in many constitutions and especially the Universal Declaration of Human Rights.

I as a loyal citizen of USA, hereby declare that for the purposes of my public life, the constitution of USA would take precedence over my private understanding of any scripture, as I swore allegiance to the constitution, when I became a citizen of USA and before that when I indirectly swore allegiance to the Universal Declaration of Human Rights.   How can each one of you do something similar? How can you change your world view to ensure Separation of Mosque-Church-Synagogue and State and in so doing recognize equal human dignity of each and every citizen of planet earth?  And of course the Hindu and the Buddhist temples and the ivory towers of atheist elite need to be separated from state, as well!  What can the agnostics and atheists do to ensure this vision and not be guided by the prejudices of the religion of their birth and social group?  I believe those who will side with universal human dignity are like the real mother in the story of Solomon, but, what about those who fall prey to the prejudices of their religious upbringing or groups, for one reason or the other? Are they more akin to the false mother?  You be the judge!