LIBOR scandal: What is it and why you should care?

Christians Science Monitor: What is LIBOR?

LIBOR stands for London Interbank Offered Rate. It’s supposed to measure the average interest rate that banks charge when they lend to each other. LIBOR is also used as a foundation for other rates (such as the reset of adjustable rate mortgages) and a reference point for complex financial derivatives. 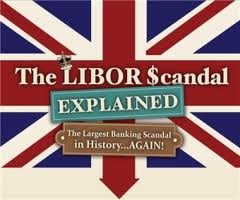 By one measure, some $300 trillion in loans or derivative contracts are pegged to LIBOR. That’s 20 times the size of one year’s economic output in the United States.

The LIBOR rates are determined by major banks. The banks report interest-rate estimates to the British Bankers Association, and the firm Thomson Reuters averages them to provide daily LIBOR numbers. The catch: The banks provide the numbers on an honor system. That’s different from gathering data on observable transactions.

Who manipulated it, and how?

So far, Barclays is Exhibit A: Its chief executive officer has stepped down, and the firm will pay $453 million in fines to settle charges of LIBOR manipulation dating back as far as 2005. More banks will probably be implicated.

The US Commodity Futures Trading Commission, which charged Barclays and reached a June 27 settlement, stated that other banks were at least sometimes involved. Barclays traders “coordinated with and aided and abetted traders at other banks,” the CFTC said, sometimes on days “when many derivatives contracts are settled or reset.”