UK:David Cameron accused of presiding over ‘shambles’ on fuel as panic buying gets worse

David Cameron has been accused of presiding over a “shambles” as petrol stations throughout the country ran out of fuel after government attempts to allay panic buying backfired. 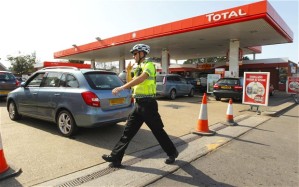 Ministers had said drivers should not rush to the pumps but should take the “sensible” measure of keeping their tanks two thirds full.Despite there being no possibility of a strike by tanker drivers for at least 11 days, motorists formed queues up to half a mile long at filling stations. In Dorset, police were forced to step in and ask seven forecourts to close temporarily because of fears for road safety.

Elsewhere pumps ran dry, fuel was rationed and tempers frayed as drivers waited for up to an hour to fill up, buying 81 per cent more petrol and 43 per cent more diesel than on an average day. Police forces, motoring organisations and petrol retailers lined up to criticise the advice from ministers, which caused “self-inflicted” shortages in some areas.