1,000 march in Tel Aviv against war with Iran

In the first significant antiwar- with-Iran protest held in Israel, around 1,000 people marched through central Tel Aviv on Saturday evening to voice opposition to those calling for a military strike to stop the Islamic Republic’s quest for nuclear weapons. 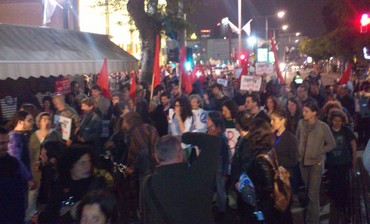 “We will not agree to an irresponsible Israeli attack on Iran, leading to a war with an unknown end-date and casualty count,” organizers said on the protest’s Facebook page, under the title “Israelis Against the War.”Read more