Women at war: Pentagon is easing its job limits 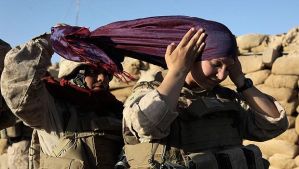 WASHINGTON: New orders from the Pentagon: The military on Thursday formally opened thousands of jobs to women in units that are closer to the front lines than ever before, reflecting what’s already been going on as female American soldiers fight and die next to their male comrades.

The new rules, affecting thousands of jobs, will break down more of the official barriers that have restricted the military positions women can take. They’re being sent to Congress, and if lawmakers take no action after 30 work days the policy will take effect.