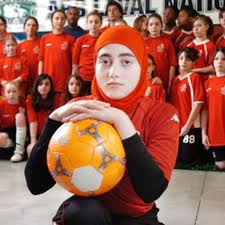 TOKYO: FIFA is considering changing their laws to allow women to wear a hijab, or headscarf when they play in official matches.

Prince Ali Bin Hussein of Jordan, 35, the youngest member of FIFA’s executive committee and the Asian vice-president, made a presentation to members at their meeting in Tokyo on Saturday and was given the go-ahead to present the case when the law-making International Board meets in Bagshot, England, next March.

In a statement, Prince Ali said he wanted the International Football Association Board (IFAB) to sanction a safe, velcro-opening headscarf for players and officials and asked them to re-consider the law when they meet on March 3.

“I look forward to presenting the case at the IFAB meeting,” he said.

“This issue impacts on millions of women worldwide and it is crucial to address, in the best possible way, the issue that ensures the safety of the players, respects culture and promotes football for all women without discrimination.”

He added: “This is a crucial step forward. Our goal at the end of the day is to ensure that all women are able to play football at all levels without any barriers.”

FIFA’s Law 4 regarding kit states that a player must not use equipment or wear anything that is dangerous to himself or another player, including any kind of jewellery.

It lists the “basic equipment” as a jersey, shorts, socks, shin-guards and footwear.

IFAB, formed in 1886, is soccer’s ultimate law-making body comprising four members from FIFA and four from the British associations.

Any recommendation needs a three-quarters majority to be passed.