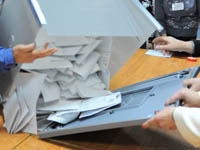 92 percent of votes as of Monday morning,

Dec. 5. United Russia, the ruling party, has gained 49.67 percent of votes, Nikolai Konkin, the secretary of the commission said.

United Russia is the leader in all entities of the Russian Federation. In Chuvashia Republic, for example, the ruling party gained 43.73%.

In Kabardino-Balkaria, the party gained over 80% of votes.