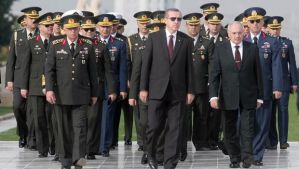 ISTANBUL: Turkey faced turmoil within its military on Saturday after the country’s four most senior commanders quit in protest over the detention of 250 officers on charges of conspiring against Prime Minister Tayyip Erdogan’s government.

Chief of General Staff General Isik Kosaner stepped down on Friday evening along with the army, navy and air force commanders, plunging NATO’s second largest armed forces into uncertainty shortly before a senior promotions board convenes.

In a farewell message to “brothers in arms,” Kosaner said it was impossible to continue in his job as he could not defend the rights of men who had been detained as a consequence of a flawed judicial process.

Relations between the secularist military and Erdogan’s socially conservative Justice and Development Party (AK) have been fraught since it first won power in 2002, due to mistrust of the AK’s Islamist roots.

Though the sudden departures are embarrassing, they could give Erdogan a decisive victory over a military that sees itself as guardian of the secularist state envisioned by the soldier statesman and founder of modern Turkey, Mustafa Kemal Ataturk.

Erdogan marked out Kosaner’s successor on Friday, as his office put out a statement naming paramilitary Gendarmerie commander General Necdet Ozel as new head of land forces, and acting deputy chief of general staff, effectively making him next in line when Kosaner handed over the baton.