Hijrah calendar: A Landmark of the World History 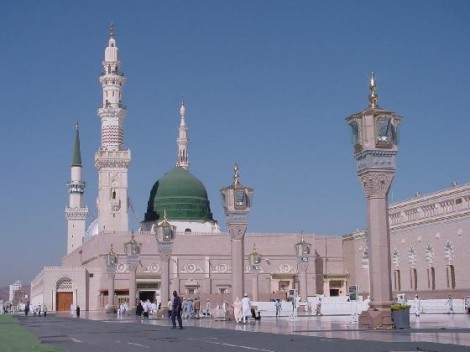 Mosque of Medina, first built in 1 AH (After Hijra)

The word Hijrah, which stands for migration, is a full message of Islam in itself. It strikes the mind with several questions such as, who migrated; and when, where and why the migration took place. In brief, the Prophet Mohammad (peace be upon him) migrated in September 622 CE from Makkah to Madinah to save and promote the Truth. Almighty Allah protected him against all dangers and brought him an era of great success. This was the reason that Umer ibn al Khattab, the second great Caliph, ordered this event to be taken as the starting point of the Hijrah calendar. There were other calendars that carried personal tags like names of Jesus Christ or Judah; birth or coronation of a king, or foundation of a city. But, Hijrah calendar is unique in its inception attracting humanity to inquire about Islam.
It was only six years after the Holy Prophet (peace be upon him) that Caliph Umar in 17th AH consulted the learned and canonized the Year of Hijrah, as suggested by Ali Ibn Abi Talib, as the beginning of Islamic era. Uthman bin Affan suggested that the year might begin from the month of Muharram after Haj, which was approved. Thus the first year of Hijrah (1 AH) began from Muharram 1, corresponding to the 16th July 622 CE, a Friday.
The actual migration of the Prophet (peace be upon him) had taken place on 12th Rabi Al-Awal, 1 AH, corresponding to 24th Sept. 622 CE.
Islam being the religion most suited to natural way of human life prescribed the cycle of recurring natural phenomena familiar to common man in his every day life for observance of Salat, Saum, Zakat and Hajj, and best suited to the people of every color, clime and the continent. The most obvious and most precise of these are the alteration of day and night and the changing phases of the moon.
As a matter of fact all the three religions — Judaism, Christianity and Islam — were prescribed with lunar calendars. Jewish calendar is still lunar and like Islamic calendar begins at preceding sunset. Christian calendar was lunar in the beginning, but later it was changed to a solar one. However few festivals such as Easter and Good Friday are still celebrated on lunar dates. The natural phenomenon of day and night is more acceptable to the common man than a.m. and p.m. As the moon appears in the night, the date in the Islamic (also in Jewish) calendar begins in the night and follows the day. It is not like the Gregorian calendar where the night is split into two halves.
Can someone believe that under the generally accepted solar calendar, the year 45BC was 445 day long? Or, in October 1582, people went to bed on the 4th and woke up on the 15th. This is what and much more than that happened all through the past centuries to readjust the solar calendar.
The well publicized Christian calendar was invented by Dionsius Exigus in 532 CE, presuming the birth of the Jesus Christ to be 1 CE. But later Biblical scholars declared that his calculation was wrong as Jesus Christ was born in BC 4 of the present calendar. Further, the Christian calendar was revised in 1582 CE, by Pope Gregory III, hence known as Gregorian calendar. France accepted this calendar in 1582 but Great Britain refused to do so resulting in two different dates prevailing in Europe up to 1752 when Britain accepted the Gregorian calendar and applied it in all its colonies in Asia, Africa and Americas. It was only 90 years before and after WWI that this calendar assumed an international status. Greece accepted it as late as 1923; and Turkey in 1927.
It was Islam that introduced for the first time a natural and truly international calendar. The Hijrah calendar canonized in 17 AH (638 CE), and within the first century Hijrah when Caliph Umer bin Abdul Aziz ruled at Damascus in 99 AH, this calendar was used in Muslim territories of France, Spain, North Africa, the Middle East, Turkey, Iran, Chinese Turkistan and India. This gigantic region comprised more than half of the then known world.

Astronomically, we know that the moon revolves around the earth in 29 days 12 hours, 44 minutes and 2.78 seconds. It completes 59 days in two lunations. The remaining fraction constitutes 11 days in 30 years. For a uniform Hijrah calendar, the first month is taken as 30 days and the second as 29 days totaling 59 days in two months and 354 days in a year. The extra 11 days are added as 30th Dhul-Hijja in 11 years numbering 2, 5, 7, 10, 13, 16, 18, 21, 24, 26, and 29 of a 30 year-cycle thus creating a perfect Hijrah calendar. This system has already been accepted by all Muslim and non Muslim astronomers, scholars, historians of the past and the present. It has been reiterated by Wustenfel Mahler of Germany, Mohammed Mukhtar Pasha and Ahmad Atiyatullah of Egypt, Habibur Rahman Sabri of India, Abdul Quddus Hashmi of Pakistan and Dr. Ibrahim Juma of Dar Malik Abdul Aziz of Riyadh, Saudi Arabia.

Read more in the Arab News: