A blessing for mankind ,Muhammad (Saw)

Would we exist without Muhammad(saw) ?

Permitted them to worship in the sacred mosques of Islam … yes.
You Are par-excellence … an embodiment …

The most noble of God’s creation … would that I could have spilled
My blood as martyr for your sweet sake and safety. You are
Altogether lovely … you are my beloved … you are Muhammad”

(Poem : Muhammad … A Light Unto Mankind ) 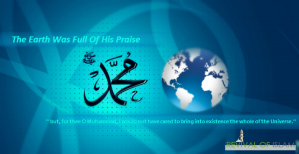 The greatest benefactor of mankind. He was the last of the law-bearing Prophets of God. His coming was prophesied by the holy founders of all religions, and their successors. His law was the last law or revealed book for mankind as a complete unit. Prophets before him were national prophets. His message was universal. God commands him to say in the Quran,

O mankind, truly I am a Messenger to you all from your Lord. The God of Islam is the One God of all people. The Quran says, All praises belong to Allah (God), Lord, Creator, and Sustainer of all of mankind,and not Hear ye Israel, the Lord our God is One God or The Lord God of Israel, who does wondrous things.

The Holy Prophet Muhammad, peace and blessings be upon him, had the real status of a Prophet and not that of a ruler upon this earth. He was the seal of the Prophets i.e., the best and the most perfect of the prophets, the embellishment and ornament of the prophets, instead of being a monarch or an emperor. Almighty God describes his status in the Holy Quran: