Contents and Photos by Naeem Nayyar.

Ahmadiyya Muslim Community Germany is comprised of 3 sub organizations. Majlis Ansarullah, being one consisting male members of ages ranging from 40 and above, having been blessed with matured members of the community serves as role model to other two sub organization. During the year along with many programs, the sub organization organised its annual gathering (Ijtema) on 13-15th of July in the city of Die burg-Germany. A big hall for gathering, two auxiliary halls and play ground for sports were hired from a local school of the city. Above 2500 members of the community took part in various events. A Strong delegation from neighbouring country Belgium also participated. Highlights of the event were the opening speech by Ch Iftikhar, the head of sub organization, who read out a very inspiring message of the supreme  head of the Community. Mirza Masroor Ahmad, the Supreme Head of International Ahmadiyya Muslim Community blessed the event with his special message highlighting to the members of sub organization to become role models in their noble character both for religious and worldly matters. Members of sub organization also reminded to set good and noble examples for the whole community. Ch Iftikhar in his speech pointed out various distinctive accomplishments of the sub organization. Tree plantation campaign taken by sub organization is bringing very encouraging impact on local society.  He narrated very inspiring incidents of Soest and Würzburg where due to plantation campaign Ahmadiyya Muslim Community has been placed very high in the eyes of German society. Specially the slogan, “Love for all and Hatred for none” is creating an everlasting impact on Germans.  Mr Abdullah Wagishauser, national head of Ahmadiyya Muslim community Germany, in his speech, drew the attention of participants to their responsibility of becoming a savior to whole mankind. Improvement in spiritual aspects and conveying of Ahmadiyya message to fellow beings were main points of his address. 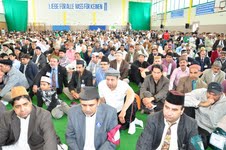 Participants of the event (Ijtema)

Various competitions were also held during the event which included both physical and knowledge competitions. Basing on yearly performance, various branches of sub organization were awarded prizes.  From spiritual as well organizational point of view the even proved to be a great success. Head of event administration Mr Mobarak Shahid and his Secretary Shahid Mahmood deserves congratulations. 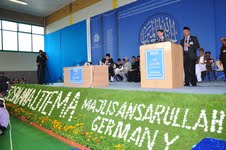