U.S. Plans No Charges Over Deadly Strike in Pakistan: From Allies to Foes

The New York Times: Erik Schmidt: An American investigation in December found fault with both American and Pakistani troops for the deadly exchange of fire, but noted that the Pakistanis fired first from two border posts that were not on coalition maps, and that they kept firing even after the Americans tried to warn them that they were shooting at allied troops.Pakistan has rejected these conclusions and ascribed most of the blame to the American forces. 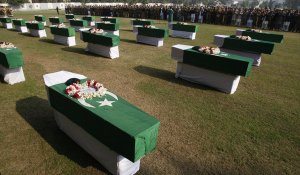 The American findings set up a second inquiry to determine whether any American military personnel should be punished. That recently completed review said no, three senior military officials said, explaining that the Americans fired in self-defense. Other mistakes that contributed to the fatal cross-border strike were the regrettable result of battlefield confusion, they said.

“We found nothing criminally negligent on the part of any individual in our investigations of the incident,” said one senior American military official involved in the process, who spoke on the condition of anonymity because the results of the review had not been made public.

Tagged as: US Pakistan Relations