From London, to Glasgow and across the UK, the Ahmadiyya Muslim Peace Campaign is spreading right across the nation bringing hope in this age. 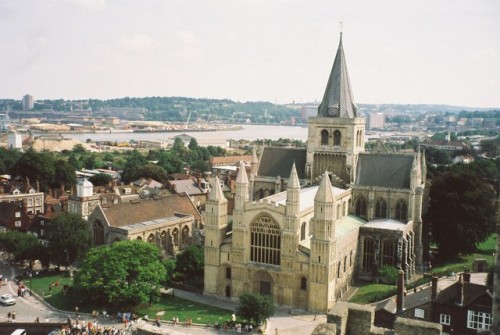 Rochester Cathedral is England’s second oldest, having been founded in 604 AD by Bishop Justus.

Thursday 1st March 2012 saw a unique occasion at Rochester Cathedral, UK, when the Ahmadiyya Muslim Community UK launched a bus campaign to highlight the themes of Peace, Loyalty, Freedom and Tolerance. Members of the Ahmadiyya Community joined by dignitaries from multiple faiths gathered in front of Rochester Cathedral for this historic event coming together in pursuit of their common goals. Local President of the Ahmadiyya Muslim Community Gillingham, Mr Naseer Sheikh commenting on the campaign highlighted, “This is part of a nationwide campaign to highlight exactly what Muslims believe. We believe passionately in the values of Freedom of conscience, loyalty to your country, tolerance of all faiths and backgrounds and peace in the community. It is our shared goal to bring people together and not to divide them. ”

The ceremony started with the recitation of the Holy Quran followed by a welcome address from the Acting Dean of Rochester Cathedral, Dr Phillip Hesketh who expressed his wholehearted support for the campaign in the light of the teachings of Jesus Christ (peace be upon him). The Mayors of Medway and Maidstone were amongst the dignitaries who attended and spoke at the ceremony, both expressing their delight that an initiative had been taken to remove misunderstandings and bring communities together. Mr. Gabriel Lancaster MBE of the Jewish Community also spoke quoting from Jewish holy scriptures.

The keynote speaker was the Imam of the London Mosque, Maulana Ata ul Mujeeb Rashed. He quoted from the Holy Qur’an which taught that Man’s salvation lay in obedience to God Almighty and service of mankind. He emphasised these teachings in fact were common to all the worlds’ faiths which is why the Holy Qur’an has made it an article of faith that Muslims should believe in the truth of all the Prophets of God and should treat the followers of all faiths with great respect.”

After the speeches the official launch took place with a bus which carried the motto “Love for All, Hatred for None. Muslims for Peace, Loyalty, Freedom and Tolerance” A ribbon was cut jointly by the Imam and the Acting Dean as a symbol of unity between all.

Tagged as: Love for All, slide