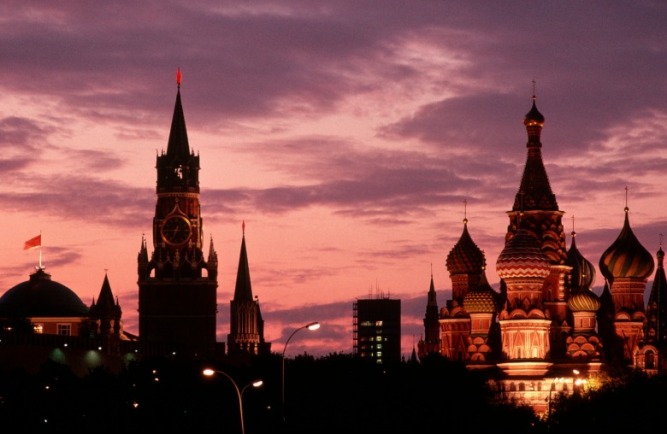 Getty/Corbis/VCG/Peter Turnley) The view from Red Square at twilight: St. Basil’s Cathedral (right) and Savior’s Tower on the Kremlin walls.  The Muslim Times has the best collection of articles for rational understanding of Christianity

Russia’s Journey from Orthodoxy to Atheism, and Back Again

Based on a book, A Sacred Space is Never Empty: A History of Soviet Atheism
By Victoria Smolkin; Princeton University Press, 2018

In Russia, there is a religious revival happening. Orthodox Christianity is thriving after enduring a 70-year period of atheistic Soviet rule. In 1991, just after the collapse of the USSR, about two-thirds of Russians claimed no religious affiliation. Today, 71 percent of Russians identify as Orthodox. One can now see priests giving sermons on television, encounter religious processions in St. Petersburg, and watch citizens lining up for holy water in Moscow. Even Moscow’s Darwin museum features a Christmas tree during the holidays. President Vladimir Putin has encouraged this revival and he has also benefited from it, both at home and abroad. Last year, he explained that Russia’s intervention in the Syrian civil war was designed to protect Christians from the Islamic State. Not only has the Orthodox Church supported this “holy war” but so have some American evangelicals, who are likewise concerned about Christians in the Middle East and praise Putin’s socially conservative policies.

Russia was transformed from a bastion of conservative Orthodoxy in the nineteenth century into the world’s leading promoter of atheism in the twentieth. This historical backdrop of Russia’s remarkable journey from Orthodoxy to atheism, and back again, is chronicled in Victoria Smolkin’s A Sacred Space is Never Empty: A History of Soviet Atheism. It is the first full account of Soviet atheism, from the Bolshevik revolution in 1917 to the dissolution of the USSR in 1991. This engaging book is full of striking analysis and counterintuitive insights. And Smolkin, associate professor of Russian and Soviet history at Wesleyan University, has two big arguments to make. The first is that the meaning of Soviet atheism has changed drastically over time. The second argument is even more surprising: Today’s religious revival in Russia began before 1991, she argues, and was promoted by the very organs that were meant to rid the USSR of religion.

When Vladimir Lenin came to power in Russia in 1917, he held to the Marxist view that once capitalism was abolished, religion would likewise wither away. It was a slight twist on classic secularization theory, which held that as societies modernize, people lose faith. For Lenin, and for his successor Josef Stalin, atheism was not something that required much thought. It was simply the absence of religion and would come naturally in due time as the Soviet Union developed into a modern society. More pressing for Soviet leaders was the political power of the Orthodox Church. One by one, rival political parties were outlawed, and ideologies were banned but private piety remained legal in the USSR. So did churches, mosques, and synagogues. As one Soviet official pointed out, “religious organizations are the only legally existing counterrevolutionary organizations” in the Soviet Union.

Under Lenin and Stalin, new atheist organizations like the League of the Militant Godless waged war on religious institutions. Although churches and monasteries were technically legal, officials found ways of shutting them down, and they transformed some of them into cathedrals of atheism. The Donskoi Monastery became the Moscow Antireligious Museum and the Kazan Cathedral in Leningrad (today, St. Petersburg) became the Museum of the History of Religion. In 1931, Moscow’s Christ the Savior Cathedral was blown up in a public display for all the world to see. “At the end of the 1930s, the party came as close as it ever would to eradicating religion,” Smolkin observes.

Despite the public spectacle and the very real repression of the Orthodox Church, however, religious belief and practice remained a part of everyday life and officials often tolerated religious practices, especially in the countryside. As Smolkin shows, even rank-and-file communists struggled with managing religious questions in family life. “What should a Leninist do if his family is still religious, does not permit taking down the icons, takes children to church, and so on,” a party member asked a Soviet newspaper’s advice column. The response “suggested a softer and more gradual approach to family disagreements over religion,” Smolkin writes. “Rather than break with his family, a Leninist should strive to enlighten.” It was common for male party members to marry religious women, the columnist noted, and they should be patient with their families.

By the eve of World War II, religious organizations had ceased to be a political threat to the Soviet state. In 1927, the Orthodox Church had pledged support for the communist government, and by 1941—when Germany invaded the Soviet Union—the vast majority of churches had been closed down and thousands of priests had been arrested or executed. In 1917, there had been more than 50,000 churches in the Russian empire, but less than 1,000 remained in 1939. It was because of his success in neutralizing the political challenge of the Orthodox Church that Stalin welcomed it back into public life during World War II, seeing it as a tool to promote patriotism at home and to earn good will of allies abroad. As Orthodoxy became politically useful for Stalin, he no longer wanted atheist organizations around. “With the start of the war, atheist periodicals and publishing houses were shut down, most antireligious museums were closed, and most of the institutions charged with atheist work were dissolved,” Smolkin writes.

Stalin felt that he had control of the Orthodox Church, which he used to bolster his domestic authority and foreign policy. But religious beliefs and practices outside the church, in everyday life, were not as easy to control, and they caught the attention of Soviet officials after Stalin’s death in 1953. Feast days and pilgrimages to holy sites could not always be managed by the Orthodox Church or the Soviet state. Nor could miracles. Smolkin relays a widely reported story from 1956 of a young girl who was turned to stone for blasphemy after shouting, “If there is a God, then let him punish me!” The location of the alleged incident in the industrial town of Kuibyshev (today, Samara) drew hundreds of curious onlookers and became a destination for pilgrims. By 1956, when Nikita Khrushchev came to power, unofficial, extra-ecclesiastical religious practices became suspect and were targeted. So were private beliefs. The persistence of religion in everyday life—56 percent identified themselves as believers in the last census to ask about religion in 1937—encouraged Khrushchev’s officials to revive the atheist apparatus that Stalin had shut down and to focus on eradicating religion in the private lives of Soviet citizens.