British Women Who Turn To Islam

Societal permissiveness, where family life has broken down in the absence of traditional mores, has made demands on young women, valuing them accordance to their physical attributes. Islam offers those women a sense of belonging, a community of like minds in areas where there is a substantial Muslim population. It provides structure to their life, a blueprint for living and a sense of personal security; it gives them renewed dignity and, as they perceive it, increased worth as a human being. There are cases where women have gone through hard times and see their conversion to Islam as a re-birth, a wiping clean of the slate.

The Muslim population in England and Wales has increased by 80 percent since 2001 according to a British government census. With 2.7 million known adherents — 40 percent living in and around London — Islam has emerged as Britain’s second-largest religion after Christianity. Immigration accounts for most of the increase but conversions are on the rise making Islam the UK’s fastest-growing faith. Data from mosques indicates there may be more than 100,000 converts in Britain of various ethnicities. There were 5,000 conversions in 2012 of which three quarters were young females. What’s fueling this trend? 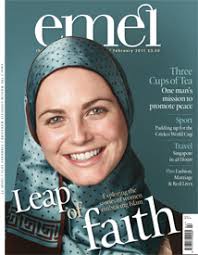