Washington Post: DAKAR, Senegal — After prayers at the mosque, Ibrahim Lo is off to do some last-minute Christmas shopping. Soon he is eyeing the rows of dolls wrapped in plastic bags on a wooden table as he searches for gifts for his four children.

A bouquet of inflatable Santa toys tied to a nearby tree bobs in the air at this outdoor market in the seaside capital as he makes his picks. 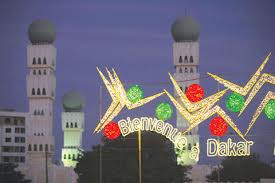 It looks a lot like Christmas in Senegal, where 95 percent of the 12.8 million residents are Muslim. Even the Grande Mosquee, a mosque that dominates the city’s skyline, is aglow in holiday lights.“When they go to school, the children learn about Santa,” says Lo, wearing a flowing olive green robe known as a boubou. “We are born into the Senegalese tradition of cohabitation between Muslims and Christians. What is essential is the respect between people.”More:

Tagged as: Christmas shopping, Islam and Tolerance, Jesus in Islam, Muslims and Christians, muslims love Jesus, prayers at the mosque