In one brief visit on Monday morning, President Obama drew crucial attention to one of the world’s most egregious human rights tragedies, the plight of the Rohingya Muslims in Myanmar’s Rakhine state.

A Muslim minority situated along the country’s western coast, the Rohingyas have been brutally targeted for extinction by ethnic Arakanese, aided at times by government security officials. Satellite imagery released by Human Rights Watch earlier this month exposed destruction covering 348 acres and involving at least 4,855 destroyed structures. At least 200 people have died in recent attacks, and more than 100,000 people have been displaced in the violence. 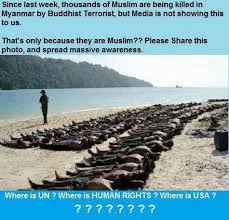