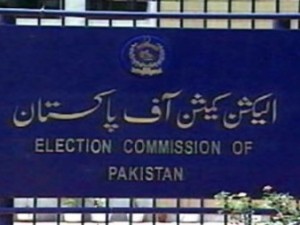 ISLAMABAD: The Election Commission of Pakistan (ECP) on Monday has taken serious notice of the slapping incident of a polling staffer byPS-53 by-election candidate Syeda Wahida Shah Bukhari. The Chief Election Commissioner (CEC) has withheld results till an inquiry in to the matter presents its results.

An official statement issued on Monday by the ECP read, “It was agreed without demur by the members of the ECP that the official result of the said constituency may be withheld till the completion of the inquiry.”

Bukhari was leading the by-poll as per initial counting.

Chief Election Commissioner Justice (retd) Hamid Ali Mirza has ordered the registering of an FIR against Bukhari, who was caught on camera slapping two women at polling station No 16- Government Girls High School, Tando Muhammad Khan in Sindh for PS-53.

The official statement further said,“Returning Officer for PS-53 Ali Asghar Sial has also been directed to take immediate cognisance of the matter under section 86-A of the Representation of People Act, 1976 and all other enabling provisions, for alleged violation of the provision of section 86, hold an inquiry (summary trial), hear the necessary parties and pass the orders.”