AMMAN — A dawn blast in Egypt’s Sinai Peninsula dealt Jordan’s energy sector its latest setback on Sunday prompting officials to prepare for yet another prolonged period without Egyptian gas supplies.

According to Egyptian state media, civil defence teams have contained a fire following twin explosions on the Arab Gas Pipeline near the city of Al Arish early Sunday morning. The blasts marked the twelfth act of sabotage on the pipeline in less than a year.

According to sources at GASCO — the Egyptian firm that oversees the gas pipeline — technical teams have yet to determine the extent of the damage caused by the blasts, which based on previous attacks may require “weeks” to repair.

Minister of Energy and Mineral Resources Qutaiba Abu Qura confirmed that the blast completely severed gas supplies, which have yet to surpass experimental levels since the previous act of sabotage on the pipeline in late November.

According to Abu Qura, the attack will lead to yet another delay in the return of Egyptian gas supplies, upon which Jordan relies for 80 per cent of its electricity generation needs, describing the blast as a “setback” to the entire energy sector.

“This will definitely have a negative impact on Jordan,” Abu Qura told The Jordan Times.

Meanwhile, officials say the blast will have a “limited short-term impact” on Jordan’s electricity sector, which has been relying on costlier heavy oil and diesel fuel since November’s attack. 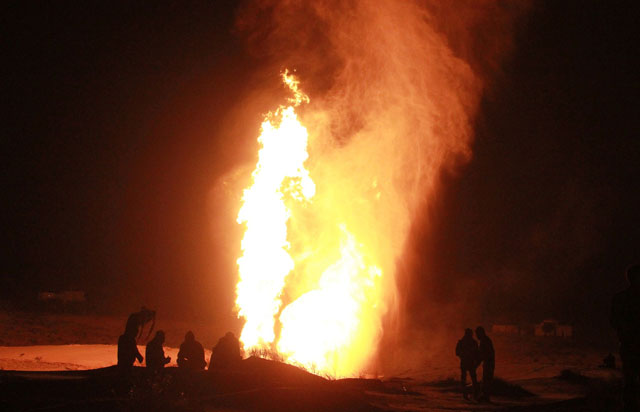 A fire burns on a gas pipeline in the town of Al Arish, North of Sinai, on Sunday. The pipeline, which supplies gas to Jordan and Israel, has come under attack at least 12 times since Egyptian resident Hosni Mubarak was toppled in 2011 (Reuters photo)