Russia sent military ships to base in Syria 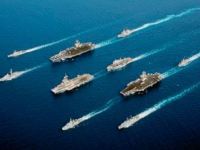 Russian warships were sent to the military base in Syria. The fleet is led by the aircraft carrier Admiral Kuznetsov. Included also are a patrol vessel and other vessels.
The Russian government announced Tuesday that from December, a flotilla of warships will be sent to the naval base that it has in Syria. The authorities affirmed that the fleet will be led by the aircraft carrier Admiral Kuznetsov and also have a patrol vessel, an anti-submarine ship, and other vessels.