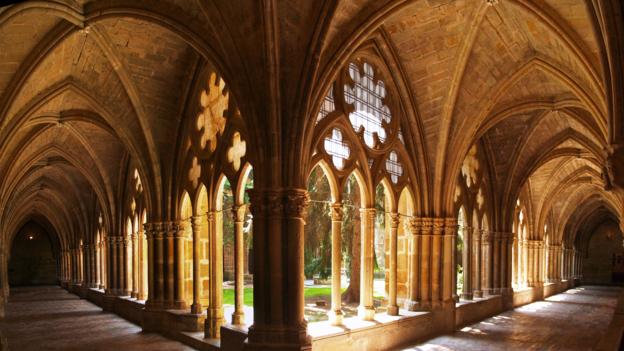 How does a tiny Spanish village of just 62 souls come to be excommunicated in its entirety and cursed with a spell so strong that only the Pope can lift it?

To find out more about this bizarre story of witchcraft, superstition, revenge, envy and power, I headed to the village of Trasmoz, nested in the foothills of the snow-covered Moncayo mountain range in Aragon. Trasmoz has centuries of witchcraft history, and I’d arranged to meet Lola Ruiz Diaz, a local modern-day witch, to learn the truth. As I waited for her in the freezing-cold hall of the half-ruined 12th-century Trasmoz Castle, perched on a hilltop above the village, I shivered in anticipation.

Ruiz, custodian of the castle, greeted me with a broad smile. She had grey hair, green eyes, chic clothes and a laptop under her arm – a far cry from the crystal balls, black candles and Tarot cards I’d been envisaging. The only things that seemed remotely witch-like about her outfit were her earrings – dangling small gold owls with little feathers attached – and the gold amulets around her neck.

“The whole saga of witchcraft in Trasmoz starts here, at this castle,” she explained. “During the 13th Century, the castle occupants dedicated their time to forging fake coins. And to keep the people of Trasmoz from investigating all that scraping and hammering, they spread a rumour that witches and sorcerers were rattling chains and forging cauldrons to boil magic potions at night. It worked, and Trasmoz was forever associated with witchcraft.”

Ruiz explained that at this time Trasmoz was a thriving community and powerful fiefdom, full of iron and silver mines and vast wood and water reserves. It was also lay territory, which meant it didn’t belong to the surrounding Catholic dominion of the Church, and by royal decree didn’t have to pay dues or taxes to the nearby monastery of Veruela – a fact that angered the Church. So when rumours of Trasmoz as a haven for witchcraft started to spread beyond the village boundaries, the abbot of Veruela seized his opportunity to punish the population, requesting that the archbishop of Tarazona, the biggest nearby town, excommunicate the entire village. This meant that they weren’t allowed to go to confession or take the holy sacraments at the Catholic church.