The monkeys that act as midwives 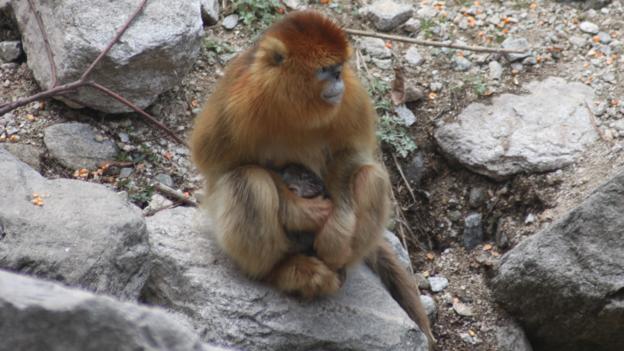 Monkeys rarely give birth during the day. The darkness of night gives them better protection from any predators that are lurking. As a result, monkey births in the wild have scarcely been observed.

It was previously believed that they usually give birth alone.

Now for the first time in several decades of observation, researchers have seen a wild golden snub-nosed monkey (Rhinopithecus roxellana) give birth during the day.

That was not all. The monkey had a “midwife”, another female who was there to assist her during labour.

The monkey midwife attempted to pull the infant from the mother’s birth canal on two occasions (Credit: Bin Yang)

When the pregnant female first showed signs of agitation, her helper quickly came to her and groomed her. Soon after, her contractions were clearly visible. The midwife stayed close.

As the infant’s crown became visible, the midwife twice attempted to pull it out of the birth canal. When the infant’s head was fully exposed, the mother reached down and pulled the infant most of the way, with her midwife helping until it was fully out.

The midwife attended to the mother afterwards, and was allowed to hold and lick the newborn after the mother had first fed and licked it.

The helper and one other female were allowed to hold the baby, but only 77 minutes after it was born. Another female juvenile attempted to take the infant, but was rejected by the mother.

As soon as the mother had given birth, she cut the umbilical cord and spent five minutes eating the placenta. This provided her with valuable nutrition.