Cameron Publishes Tax Details in Bid to Move on From Panama 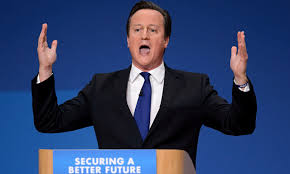 U.K. Prime Minister David Cameron published details of the taxes he’s paid since 2009 as he sought to draw a line under the furor over his personal finances, which culminated in him acknowledging on Thursday that he profited from an offshore fund linked to his father.

The four-page document, prepared by a firm of chartered accountants and published on Sunday, shows Cameron’s salary as prime minister, income from a house he rents out in London and interest on his savings. Over the six tax years through April 2015, he paid 402,283 pounds ($568,345) in tax on earnings of 1.08 million pounds, according to the data.

Cameron also announced a task force to probe documents leaked from Panama law firm Mossack Fonseca as he sought to regain the initiative after being forced to acknowledgehe once held shares in an offshore fund linked to his father, Ian, which was mentioned in the papers. He was accused of hypocrisy by the opposition Labour Party and protesters outside Downing Street on Saturday, because he has repeatedly condemned companies and individuals who avoid paying tax.

Cameron’s attempt to seize control of the controversy appeared to have backfired on Sunday when newspapers reported that he had been given 200,000 pounds by his mother in what some interpreted as an attempt to avoid inheritance tax. “Cameron’s 200K Gift from Mummy,” the Sunday Mirror said on its front page, while the Mail on Sunday led with “Cameron Tax Bill Dodge on Mother’s 200K Gift.”

Cameron’s office said the gift, in two 100,000 pound payments in May and July 2011, is an often used piece of planning to reduce inheritance tax liability. It will only be liable for inheritance tax — which would be paid by his mother’s estate — if she dies within seven years of giving the gift, and was additional to 300,000 pounds left to Cameron by his father in his will.

Cameron isn’t the only prominent figure to be dragged into fallout from publication of data from the leaked papers. The Icelandic prime minister and two European banking executives were forced to resign. It’s also causing problems for Argentine President Mauricio Macri, who said this week he will put his assets in a blind trust after a prosecutor said there were grounds to investigate him following revelations of his involvement in two companies listed in Panama.

Cameron promised to publish details of his tax affairs following his acknowledgment on Thursday that he sold about 30,000 pounds of shares in his father’s fund shortly before he became prime minister. He said he had paid all tax due on the stake.

The data show the prime minister’s taxable income totaled 1.08 million pounds for the six tax years through April 2015. That included 795,766 pounds in salary, 56,451 pounds in taxable expenses on items including travel and clothing, and 215,400 pounds from his 50 percent share in renting out his and his wife’s London home.

In the year 2013-14 he received 6,681 pounds in interest from savings in “a U.K. high street bank,” the documents show, suggesting substantial cash deposits at a time when the Bank of England base rate was 0.5 percent.