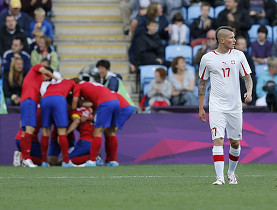 Swiss footballer Michel Morganella has been expelled from the London Olympics for posting a racist message on social networking website Twitter.

Swiss Olympic team chief Gian Gilli said Morganella was being stripped of his Olympic accreditation ahead of Switzerland’s final group match against Mexico on Wednesday.

He “discriminated against, insulted and violated the dignity of the South Korea football team as well as the South Korean people”, Gill said through a translator at a news conference on Monday.

Morganella, a defender for Italian club Palermo, posted an offensive and threatening message aimed at South Korean people after Switzerland lost 2-1 to South Korea on Sunday.

Swiss daily Le Matin published images of a tweet from his account, which has since been deleted.

Writing in French slang and text-messaging language the player wrote about wanting to “beat up every Korean”, calling Koreans a “bunch of mongoloids” [trisos – a pejorative French term for people with Down’s syndrome].”

“I apologise sincerely to the people of South Korea, to the players, but equally to the Swiss delegation and Swiss football in general. It’s clear that I’m accepting the consequences.”

“After the disappointing result and the reaction from Korea that followed, I made a huge error,” Morganella added.

Gilli said the player had been “provoked” by comments sent to his Twitter account after the match.

Still, the Swiss team leader acknowledged that Morganella had to be sent home under the terms of the International Olympic Committee’s code of conduct, which requires athletes to show mutual respect.

“In this case, we felt we have no alternative,” Gilli said.

Social media guidelines
Morganella is the second Olympic athlete to be kicked off a team for offensive Twitter comments.

The IOC has encouraged the 10,800 athletes at the London Games to communicate with fans through social media, but it issued guidelines on the standards of behaviour it expected.

Switzerland has yet to win a medal at the 2012 Olympic Games.