Oud: The Scent of Arabian Luxury 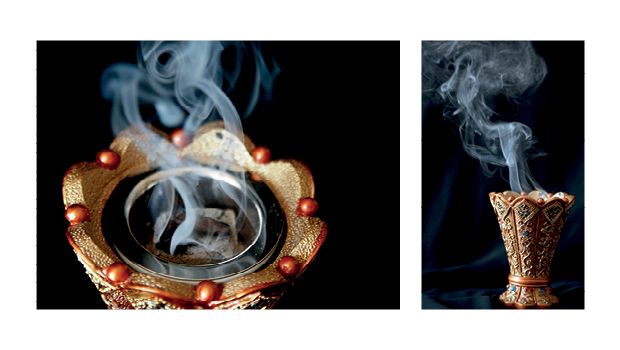 A renowned Arab Caliph once said: “If I were a merchant, I would only trade in Oud perfume, so that if I did not make a profit, I would have profited from its sensational scent.”

Oud (agarwood or agar) comes from trees found in India, Cambodia, Yemen, Thailand and Ethiopia. It is a certain fungal infection that comes from Aquilaria trees, which is peeled off the tree. The chips are initially pale and light in color; the heartwood turns dense and dark as a result of the growth of a dangerous mold.

Oud has a very strong and unique scent that is available in chips, which are lit and burned. The scented smoke is called Bakhoor. Oud is also available in an oil form, which is placed in small perfume bottles. People apply the oil on certain areas such as behind the ears and on the wrists for a long-lasting scented effect.

Oud oil is produced by mashing agarwood and placing it in distilling pots and covering them with several inches of water. The lid is then closed and the pot is heated until the water boils. The boiling water ruptures the cells of the wood and the vapor of agarwood oil and steam rises to the top of the pot and escapes, released through a tube leading to a condenser. The condenser cools the vapor and is itself repeatedly cooled by water.

After soaking, the barrels of agarwood mash are emptied into distilling pots and placed over wood fires for distillation. The heating process may look primitive, but the fires are tended by skilled workers who control the temperature quite carefully.

As the vapor passes through the condenser and is cooled, it reverts to a liquid form and is collected in a vessel where the oil and water separate. The water is drawn off leaving the agarwood oil.