Biology of Our Human Family: Who are We Related To? 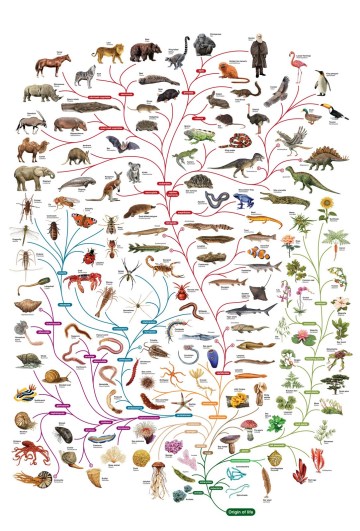 Charles Darwin’s tree of life, linking all life forms, it implies that 9 million life forms have come about by survival of the fittest and suffering, which along the way has created beauty and elegance

The 2016 Nobel Prize in medicine has been awarded to Yoshinori Ohsumi of Japan for his discoveries on how the body’s cells detoxify and repair themselves a process called autophagy.  His work also supplied a subtle proof of evolution and the fact that all life forms on the planet earth share their ancestry.

Yoshinori Ohsumi used baker’s yeast to identify genes essential for autophagy. He then went on to elucidate the underlying mechanisms for autophagy in yeast and showed that similar sophisticated machinery is used in human cells.[1] All the nine million animal and plant species in our world seem to share many proteins and enzymes.[2]

One illuminating example is that of  protein Cytochrome C that is involved in cell respiration. The sequence of amino acids in this protein is known for many organisms, from bacteria and yeast to insects and humans. In animals, Cytochrome C consists of 104 amino acids. In humans and chimpanzees, the protein consists of the same 104 amino acids in exactly the same order.  When the amino-acid sequences of humans and rhesus monkeys are compared, they are found to be different at position 66 (isoleucine in humans, threonine in rhesus monkeys), but identical at the other 103 positions. When humans are compared with horses, 12 amino-acid differences are found; and when horses are compared with rhesus monkeys there are only 11 amino-acid differences. All these observations supporting common ancestry.

Not to speak of our human family, all life forms on our planet earth, plants and animals, 350,000 species of flowers, bacteria and viruses and elephants and rhinoceroses have common ancestry.

The Journey of Man: A Genetic Odyssey is a 2002 book by Spencer Wells, an American geneticist and anthropologist, in which he uses techniques and theories of genetics and evolutionary biology to trace the geographical dispersal of early human migrations out of Africa. The book was made into a TV documentary in 2003.[3]

According to the recent single-origin hypothesis, human ancestors originated in Africa, and eventually made their way out to the rest of the world. Analysis of the Y chromosome is one of the methods used in tracing the history of early humans. Thirteen genetic markers on the Y-chromosome differentiate populations of human beings.

It is believed, on the basis of genetic evidence that all human beings in existence now descend from one single man who lived in Africa about 60,000 years ago. The earliest groups of humans are believed to find their present-day descendants among the San people, a group that is now found in western southern Africa. The San are smaller than the Bantu. They have lighter skins, more tightly curled hair, and they share the epicanthal fold with the people of Central and South East Asia.

Southern and eastern Africa are believed to originally have been populated by people akin to the San. Since that early time much of their range has been taken over by the Bantu. Skeletal remains of these ancestral people are found in Paleolithic sites in Somalia and Ethiopia. There are also peoples in east Africa today who speak substantially different languages that nevertheless share the archaic characteristics of the San language, its distinctive repertoire of click and pop sounds. These are the only languages in the entire world that use these sounds in speech.

As humans migrated out of Africa, they all carried a genetic feature on the Y chromosome known as M168 (Haplogroup CT (Y-DNA)).

The first wave of migration out of Africa stayed close to the oceans shores, tracing a band along the coastal areas of the Indian Ocean including parts of the Arabian Peninsula, the Middle East, the Indian subcontinent and into South East Asia, down into what is now Indonesia, and eventually reaching Australia. This branch of the human family developed a new marker M130 (Haplogroup C (Y-DNA)).

The second wave of migration took a more northerly course, splitting somewhere in the area around what is now called Syria to sweep to interior Asia, where it split several more times in Central Asia, north of Afghanistan. The lineages that flowed into Central Asia carry M9 (Haplogroup K (Y-DNA)). Other markers were added after the migration paths went on in several different directions from Central Asia.[4]

There are several verses in the Holy Quran that allude to evolution of life and of the human family, employing one metaphor or the other. In the following verse Allah mentions the shared origin of all of humanity:

The 2 hour TV documentary, The Journey of Man: A Genetic Odyssey, can be watched online in the Muslim Times and gives us good insight into human biology and evolution of different races in the last 60,000 or so years.[6]

Now, let us talk about what happened to humans between 60,000 years and 7 million years ago. For this I suggest a trip to the Museums of Natural History in New York and London.

The Museum of Natural History in London

The Museum of Natural History in London states:

Embark on a seven-million-year journey, from the first hominins to the last surviving human species: us.

Investigate what defines a hominin and how much we modern humans have in common with other human species, as well as what sets us apart.

Along the way you will discover the changes in physical characteristics, diet, lifestyles and environments that have shaped modern humans.[7]

The website then tabulates its star specimens and exhibits:

The biggest highlight of the American Museum of Natural History in New York is Lucy:

“Lucy” is one of the most complete skeletons found to date from the early hominids that flourished between 4 and 2 million years ago. The skeleton consists of bones from a single individual, presumably female, who stood well under 4 feet tall.[8]

Prof. Richard Dawkins in his excellent book, The Ancestor’s Tale: A Pilgrimage to the Dawn of Evolution, describes human journey of evolution from unicellular organisms to the modern era, but traveling backwards in a reverse direction, starting with modern humans, through apes, through primates, rodents and rabbits and so on.[9]

The back cover of the book describes:

With unparalleled wit, clarity, and intelligence, Richard Dawkins, one of the world’s most renowned evolutionary biologists, has introduced countless  readers to the wonders of science in works such as The Selﬁsh Gene. Now, in The Ancestor’s Tale, Dawkins offers a masterwork: an exhilarating reverse tour through evolution, from present-day humans back to the microbial beginnings of life four billion years ago. Throughout the journey Dawkins spins entertaining, insightful stories and sheds light on topics such as speciation, sexual selection, and extinction. The Ancestor’s Tale is at once an essential education in evolutionary theory and a riveting read.

As we travel back through time and as two species join into a common species or a common ancestor, he names that common ancestor a ‘concestor.’ He writes about the common ancestry between the modern humans and the present day chimpanzees:

Between 5 and 7 million years ago, somewhere in Africa, we human pilgrims enjoy a momentous encounter. It is Rendezvous 1, our ﬁrst meeting with pilgrims from another species. Two other species to be precise, for the common chimpanzee pilgrims and the pygmy chimpanzee or bonobo pilgrims have already joined forces with each other some 4 million years ‘before’ their rendezvous with us. The common ancestor we share with them, Concestor 1, is our 250,000-greats-grandparent — an approximate guess this, of course, like the comparable estimates that I shall be making for other concestors.

As we approach Rendezvous 1, then, the chimpanzee pilgrims are approaching the same point from another direction. Unfortunately we don’t know anything about that other direction. Although Africa has yielded up some thousands of hominid fossils or fragments of fossils, not a single fossil has ever been found which can deﬁnitely be regarded as along the chimpanzee line of descent from Concestor 1. This may be because they are forest animals, and the leaf litter of forest ﬂoors is not friendly to fossils. Whatever the reason, it means that the chimpanzee pilgrims are searching blind. Their equivalent contemporaries of the Turkana Boy, of 1470, of Mrs Ples, Lucy, Little Foot, Dear Boy, and the rest of ‘our’ fossils — have never been found.[10]

The next meeting points or rendezvous are with the Gorillas, orangutans, gibbons, old world monkeys, new world monkeys, tarsiers, lemurs and bushbabies, colugos and tree shrews and rodents and rabbits to name the first 10 rendezvous with us, the modern humans. By the time our ancestors meet the ancestors of rodents (rats) and rabbits, we have travelled backward in our evolutionary journey some 75 million years.

The final rendezvous in Dawkins book is numbered 39 and is with the Eubacteria. Eubactera could be either a Gram-positive or Gram-negative bacteria genus in the family Eubacteriaceae. These bacteria are characterized by a rigid cell wall. They may either be motile or non-motile. If motile, they have a flagellum.[11]

The unicellular organisms multiplied or reproduced asexually. When sexual multiplication first happened the two spouses came from the same unicellular organism, as if the organism gave rise to its own mate. This is described in the Holy Quran at least three times. In the past when biology was not well understood, the Muslim scholars understood these verses to mean that grandmother Eve came from the rib of the prophet Adam, as described in the Bible.  Many a medieval scholars of Islam, who are still not well informed, continue to maintain the same view and understand the verses that follow as one human coming from the rib of another. However, any one with very basic knowledge of biology and evolution, which is every good high school student in the West, would think of the idea of Eve coming from the rib of Adam, as preposterous. The first of these three verses is none other than the one that is recited whenever a marriage is being conducted in the Islamic tradition:

O ye people! fear your Lord, Who created you from a single soul and created therefrom its mate, and from them twain spread many men and women; and fear Allah, in Whose name you appeal to one another, and fear Him particularly respecting ties of relationship. Indeed, Allah watches over you.[12]

There is a subtle hint in the Arabic of this verse that it is not applicable to Adam and Eve and indeed is talking about the stage of asexual to sexual multiplication. The pronoun used مِنْهَا for the mother organism from which the mate came is ‘a female’ and not ‘a male,’ contrary to what the description should be if Eve came from the rib of Adam.

The other two verses with the same theme are:

He it is Who has created you from a single soul, and made therefrom its mate, that he might find comfort in her. And when he knows her, she bears a light burden, and goes about with it. And when she grows heavy, they both pray to Allah, their Lord, saying: ‘If Thou give us a good child, we will surely be of the thankful.’[13]

And He it is Who has produced you from a single soul and there is for you a home and a lodging. We have explained the Signs in detail for a people who understand.[14]

The All Knowing God of Islam and the Quran knows everything about the past and the future and cannot say anything in the Holy Quran that is against the well established facts of evolution on our planet earth over the last 4 billion years.