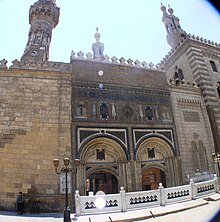 An entrance to the mosque and university. The Minaret of Qunsah al Ghuri is visible on the right. 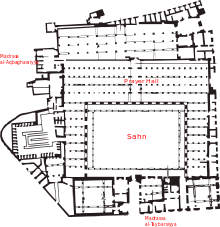 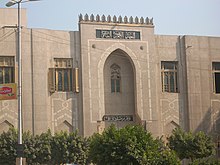 An Azhari institute in Tanta 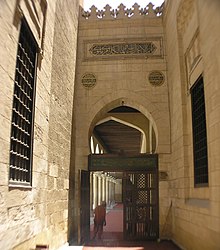 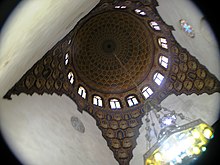 Interior of a dome in Al-Azhar mosque. 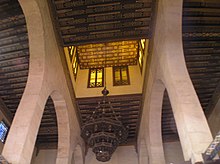 A chandelier adorns the woodworked ceiling of a prayer hall. 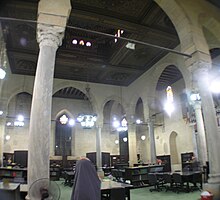 Al-Azhar University (ahz-har; Arabic: جامعة الأزهر (الشريف)‎ Jāmiʻat al-Azhar (al-Sharīf), IPA: [ˈɡæmʕet elˈʔɑzhɑɾ eʃʃæˈɾiːf], “the (honorable) Azhar University”) is a university in Cairo, Egypt. Associated with Al-Azhar Mosque in Islamic Cairo, it is Egypt’s oldest degree-granting university and is renowned as “Sunni Islam’s most prestigious university”[1] In addition to higher education, Al-Azhar oversees a national network of schools with approximately two million students.[2] As of 1996, over 4000 teaching institutes in Egypt were affiliated with the University.[3]

Founded in 970 or 972 by the Fatimids as a centre of Islamic learning, its students studied the Qur’an and Islamic law in detail, along with logic, grammar, rhetoric, and how to calculate the lunar phases of the moon.[citation needed] It was one of the first universities in the world and the only one to survive as a modern university including secular subjects in the curriculum. It is today the chief centre ofArabic literature and Islamic learning in the world.[4] In 1961 additional non-religious subjects were added to its curriculum.[5]

Its mission is to propagate Islam and Islamic culture. To this end, its Islamic scholars (ulamas) render edicts (fatwas) on disputes submitted to them from all over the Sunni Islamic world regarding proper conduct for Muslim individuals and societies. Al-Azhar also trains Egyptian government-appointed preachers in proselytization (da’wa).[citation needed]

Its library is considered second in importance in Egypt only to the Egyptian National Library and Archives.[citation needed] In May 2005, Al-Azhar in partnership with a Dubai information technology enterprise, IT Education Project (ITEP) launched the H.H. Sheikh Mohammed Bin Rashid Al Maktoum Project to Preserve Al Azhar Scripts and Publish Them Online (the “Al-Azhar Online Project”) with the mission of eventually providing online access to the library’s entire rare manuscripts collection (comprising about seven million pages).[6][7]

Al-Azhar University is one of the relics of the Isma’ili Shi’a Fatimid dynasty era of Egypt, descended from Fatimah, daughter of Muhammadand wife of Ali son-in-law and cousin of Muhammad. Fatimah, was called Al-Zahra (the luminous), and it was named in her honor.[8] It was founded as mosque by the Fatimid commander Jawhar at the orders of the Caliph and Ismaili Imam Al-Muizz as he founded the city for Cairo. It was (probably on Saturday) in Jamadi al-Awwal in the year 359 A.H. Its building was completed on the 9th of Ramadan in the year 361 A.H.(972 AD) Both Al-‘Aziz Billah and Al-Hakim bi-Amr Allah added to its premises. It was further repaired, renovated and extended byAl-Mustansir Billah and Al-Hafiz Li-Din-illah. Fatimid Caliphs always encouraged scholars and jurists to have their study-circles and gatherings in this mosque and thus it was turned into a university which has the claim to be considered as the oldest University still functioning.[9]

Studies began at Al-Azhar in the month of Ramadan, 975. According to Syed Farid Alatas, the Jami’ah had faculties in Islamic law andjurisprudence, Arabic grammar, Islamic astronomy, Islamic philosophy, and logic.[10][11] The Fatimids gave attention to the philosophical studies at the time when rulers in other countries declared those who were engaged in philosophical pursuits as apostates and heretics. The Greek thought found a warm reception with the Fatimids who expanded the boundaries of such studies. They paid much attention to philosophy and gave support to everyone who was known for being engaged in the study of any branch of philosophy. The Fatimid Caliph invited many scholars from nearby countries and paid much attention to college books on various branches of knowledge and in gathering the finest writing on various subjects and this in order to encourage scholars and to uphold the cause of knowledge. These books were destroyed by Salah-ud-Din Ayyubi.[9] In the 12th century, following the overthrow of the Ismaili Shia Fatimid dynasty, Saladin (the founder of the Sunni Ayyubid Dynasty) converted Al-Azhar to a Shafi’ite Sunni center of learning.[4][12] Saladin had ‘jealousy’ for the Fatimids, and therefore, “The Encyclopaedia of Islam” (Leiden, 1936, 3rd vol., p. 353) writes that, “He had all the treasures of the palace, including the books, sold over a period of ten years. Many were burned, thrown into the Nile, or thrown into a great heap, which was covered with sand, so that a regular “hill of books” was formed and the soldiers used to sole their shoes with the fine bindings. The number of books said to have disposed of varies from 120,000 to 2,000,000.”[13] Abd-el-latif delivered lectures on Islamic medicine at Al-Azhar, while according to legend the Jewish philosopher Maimonides delivered lectures on medicine and astronomy there during the time of Saladin though no historical proof has corroborated this.[14]

In 1961, Al-Azhar was established as a university under the government of Egypt’s second President Gamal Abdel Nasser when a wide range of secular faculties were added for the first time, such as business, economics, science, pharmacy, medicine, engineering andagriculture. Before that date, the Encyclopaedia of Islam classifies the Al-Azhar variously as madrasa, center of higher learning and, since the 19th century, religious university, but not as a university in the full sense, referring to the modern transition process as “from madrasa to university”.[5][15] An Islamic women’s faculty was also added in the same year, six years after Zaib-un-Nissa Hamidullah had been the first woman to speak at the university.[citation needed]

Al-Azhar has a membership that represents the theological schools of Al-Ashari and Al-Maturidi, the four schools of Sunni Islamic jurisprudence (Hanafi, Maliki, Shafi, and Hanbali), and the seven main Sufi orders.[16] Al-Azhar has had an antagonistic relationship withWahhabism and Salafism.[17] According to a 2011 report issued by the Carnegie Endowment for International Peace, Al Azhar is stronglySufi in character:

“Adherence to a Sufi order has long been standard for both professors and students in the al-Azhar mosque and university system. Although al-Azhar is not monolithic, its identity has been strongly associated with Sufism. The current Shaykh al-Azhar (rector of the school), Ahmed el-Tayeb, is a hereditary Sufi shaykh from Upper Egypt who has recently expressed his support for the formation of a world Sufi league; the former Grand Mufti of Egypt and senior al-Azhar scholar Ali Gomaa is also a highly respected Sufi master.”[18]

The nineteenth and current Grand Mufti of Egypt and Al Azhar scholar, Shawki Ibrahim Abdel-Karim Allam is also a Sufi.

Al-Azhar University’s Council of Senior Scholars was originally founded in 1911 but was replaced in 1961 by the Center for Islamic Research. In July 2012, after the law restricting Al-Azhar University’s autonomy was modified by the incoming president Mohamed Morsi, the Council was reformed.[19] The Council consists of 40 members and as of February 2013 had 14 vacancies[20] all appointed by the current imam of Al-Azhar, Ahmed El-Tayeb,[21] who was appointed by the prior president, Hosni Mubarak. Once the remaining 14 vacancies are filled, new vacancies will be appointed by the existing Council itself.[20] All four madhahib (schools) of Sunni Islamic jurisprudence are proportionally represented on the Council (Hanafi, Shafi’i, Hanbali, Maliki) and voting is on a majority basis.[19] In addition to El-Tayeb, other prominent members of the Council include the outgoing Grand Mufti Ali Gomaa and Qatar-based Islamic scholar Yusuf al-Qaradawi.[22] The Council is tasked with nominating the Grand Mufti of Egypt (subject to presidential approval), electing the next Grand Imam of Al-Azhar Mosque, and is expected to be the final authority in determining if new legislation is compliant with Islamic law.[19] Although the Council’s decisions are not binding (absent new legislation), it is expected that it would be difficult for the parliament to pass legislation deemed by the Council as against Islamic law.[19]

In January 2013, Al-Tayeb referred a relatively minor issue related to Islamic bonds to the Council, for the first time asserting the Council’s jurisdiction.[19] In 2013, the Council elected Shawki Ibrahim Abdel-Karim Allam to be the next Grand Mufti of Egypt. This marks the first time that the Grand Mufti would be elected by Islamic scholars since the position was created in 1895. Prior to this, the Egyptian head of state made the appointment.[21]

Sheikh Muhammad Sayyid Tantawy noted that among the priorities of Muslims are “to master all knowledge of the world and the hereafter, not least the technology of modern weapons to strengthen and defend the community and faith”. He added that “mastery over modern weaponry is important to prepare for any eventuality or prejudices of the others, although Islam is a religion of peace”.[23]

Sheikh Tantawy also reasserted that his is the best faith to follow (a tenet common to proponents of many religions) and that Muslims have the duty of active da’wa. He has made declarations about Muslims interacting with non-Muslims who are not a threat to Muslims. There are non-Muslims living apart from Muslims and who are not enemies of Islam (“Muslims are allowed to undertake exchanges of interests with these non-Muslims so long as these ties do not tarnish the image of the faith”), and there are “the non-Muslims who live in the same country as the Muslims in cooperation and on friendly terms, and are not enemies of the faith” (“in this case, their rights and responsibilities are the same as the Muslims so long as they do not become enemies of Islam”). Shi’a fiqh (according to a fatwa by Al-Azhar, the most respected authority in Sunni Islam)[24] is accepted as a fifth school of Islamic thought.

In October 2007, Muhammad Sayyid Tantawy, then the Grand Imam of Al-Azhar, drew allegations of stifling freedom of speech when he asked the Egyptian government to toughen its rules and punishments against journalists. During a Friday sermon in the presence ofEgyptian Prime Minister Ahmed Nazif and a number of ministers, Tantawy was alleged to have stated that journalism which contributes to the spread of false rumours rather than true news deserved to be boycotted, and that it was tantamount to sinning for readers to purchase such newspapers. Tantawy, a supporter of then Egyptian President Hosni Mubarak, also called for a punishment of eighty lashes to “those who spread rumors” in an indictment of speculation by journalists over Mubarak’s ill health and possible death.[25][26] This was not the first time that he had criticized the Egyptian press regarding its news coverage nor the first time he in return had been accused by the press of opposing freedom of speech. During a religious celebration in the same month, Tantawy had released comments alluding to “the arrogant and the pretenders who accuse others with the ugliest vice and unsubstantiated charges”. In response, Egypt’s press union issued a statement suggesting that Tantawy appeared to be involved in inciting and escalating a campaign against journalists and freedom of the press.[27] Tantawy died in 2010 and was succeeded by Mohamed Ahmed el-Tayeb.

Notable people associated with the university[edit]