Jerusalem life: 'Are you aware? Women should not be strolling outdoors'

As I was interviewing a secular Jewish man off to the side of a street, a flurry of flyers rained down from a balcony above us.

“ARE YOU AWARE?” the flyer asked, one side printed in English and the other in Hebrew. “Separating oneself and maintaining distance between men and women is the basis for tznius [modesty],” it said, referencing a passage from Shulchan Aruch, a 16th century compilation that Rabbi Yosef and others have held up as the basis of all Jewish rabbinical law.

But few today would endorse the conclusions that followed this statement on the flyer:

Such societal demands, together with occasional incidents of “immodestly” dressed women being scolded or stoned, are seen by many as the work of fringe groups who are becoming increasingly vocal as more ultra-Orthodox women expand the sphere of their lives – including jobs at hi-tech firms such as Intel.

It was ironic to me that I was showered with these pamphlets while standing quietly by a dumpster, apart from the crowds, rather than when my husband and I were fighting our way through a mass of humanity in Geula’s main street, which required not only brushing up against ultra-Orthodox men with top hats and swinging side curls but at times being tightly sandwiched between them. 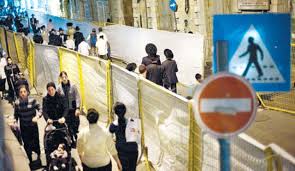