Hate is the Reason

There was a time when Ahmadis were brutally murdered and everyone kept quiet, thinking that it will never happen to anyone else and now we see that Shias are on target. This criminal silence of the past is haunting the nation today. If this hell of hate is made hot for one sect, a time is bound to come when this fire of hate inhales other people too.

In the second week of January more than 100 Hazara Shias were killed as a result of two consecutive bomb blasts in Quetta for which LeJ claimed responsibility. Relatives of the martyrs refused to bury their dear ones until the Government fulfilled their demands and in support of those Shias, nationwide and overseas protests started. Though the Government didn’t respond in the beginning, the Prime Minister had to visit Quetta at last, where he assured action against killers and announced Governor Rule in Quetta.

However, if we fail to recognize the dangers of hate today then the day is not far when our own relatives will be sitting in a Quetta with our dead bodies, protesting for justice. Your life, your country, Love or Hate , your choice. 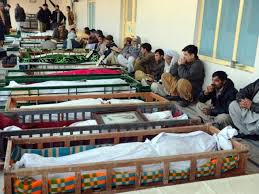