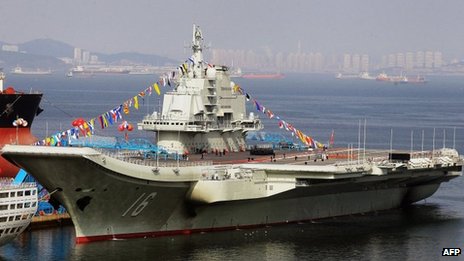 The 300m (990ft) Liaoning – named after the province where it was refitted – is a refurbished Soviet ship purchased from Ukraine.

For now the carrier has no operational aircraft and will be used for training.

But China says the vessel, which has undergone extensive sea trials, will increase its capacity to defend state interests.

The commissioning of China’s first aircraft carrier – the Liaoning (a former Soviet vessel, the Varyag) – sends a signal to other countries in the region that Beijing’s maritime ambitions are growing.

The fact that this comes at a time of heightened tensions in the East China Sea only underlines the message.

But China’s new carrier is more a symbol of a future capability than a potent naval threat itself.

Getting into the carrier business takes time; a whole range of skills has to be learnt; and carriers have to operate with other ships, requiring a new mindset across the navy as a whole.

It could be a steep learning curve, but China is moving ahead steadily, taking the first steps on the path to having a fully-fledged carrier force.

The delivery of the aircraft carrier comes at a time when Japan and other countries in the region have expressed concern at China’s growing naval strength. Read further.