AMYA invits the residents of Lindsay to Annual Convention

A Muslim associais offering residents of Lindsay and area free transportation to attend a convention and banquet lunch at no charge this Sunday, July 8 being held in Mississauga.

Ahmadiyya Muslim Youth Association of Canada (AMYA) is an auxiliary wing of Ahmadiyya Muslim Community ( http://www.alislam.org ). It’s a nonprofit, charitable, religious organization in more than 200 countries, with 65 chapters throughout Canada, said Rizwan Rabbani, national executive director, department of faith outreach and communications, with AMYA. He said depending on the number of people who RSVP, they will charter a bus or provide mini-buses that will leave at 8 a.m. from the Lindsay library on Sunday. Participants will arrive at the International Centre in Mississauga at 10 a.m. and depart at 3:30 p.m., arriving back in Lindsay at 5:30 p.m. 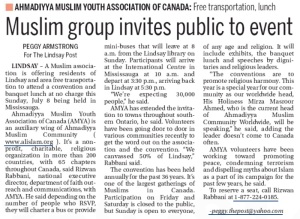 AMYA has extended the invitation to towns throughout southern Ontario, he said. Volunteers have been going door to door in various communities recently to get the word out on the association and the convention. “We canvassed 50% of Lindsay,” Rabbani said.

The convention has been held annually for the past 36 years. It’s one of the largest gatherings of Muslims in Canada. Participation on Friday and Saturday is closed to the public, but Sunday is open to everyone,

30,000 of any age and religion. It will include exhibits, the banquet lunch and speeches by dignitaries and religious leaders.

“The conventions are to promote religious harmony. This year is a special year for our community as our worldwide head, His Holiness Mirza Masroor Ahmed, who is the current head of Ahmadiyya Muslim Community Worldwide, will be speaking,” he said, adding the leader doesn’t come to Canada often.

AMYA volunteers have been working toward promoting peace, condemning terrorism and dispelling myths about Islam as a part of its campaign for the past few years, he said.