The AMR Corporation, the parent company of American Airlines, said on Tuesday that it had filed for bankruptcy protection in an effort to reduce labor costs and shed a heavy debt burden. 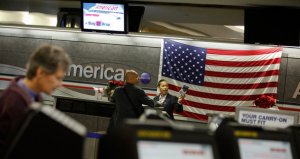 AMR was the last of the major legacy airline companies in the United States to file for Chapter 11. Analysts said that its reluctance to do so earlier had left it less nimble than many of its competitors.  Read more