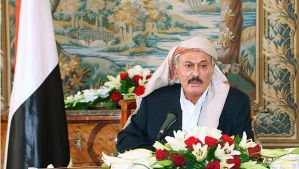 SANAA: The Gulf Cooperation Council (GCC) urged Ali Abdullah Saleh to sign a power transfer plan “immediately” as forces loyal to the Yemeni president attacked pro-opposition troops with mortar shells and heavy gunfire Saturday and rooftop snipers picked off unarmed protesters fleeing in panic. The streets of the capital were littered with bodies with more than 40 people killed.
The GCC states “affirm their commitment to help their brothers in Yemen to reach an agreement for the immediate implementation of the Gulf Initiative,” they announced at a meeting in New York late Friday on the sidelines of the UN General Assembly session.

The GCC states want to see Saleh “immediately sign the initiative and ensure a peaceful transition of power … to meet his people’s aspirations for change and reform,” the Saudi Press Agency said.