US must not cross ‘red lines’, says FM KharAP 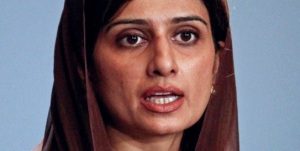 ISLAMABAD: Pakistan’s foreign minister on Saturday warned the United States against sending ground troops to her country to fight an Afghan militant group that America alleges is used as a proxy by Pakistan’s top intelligence agency for attacks in neighboring Afghanistan.

The warning came as a top US military commander was in Pakistan for talks with the army chief at a time of intense strain between the two countries. The US Embassy said Gen. James Mattis, head of US Central Command, arrived in Pakistan late Friday, and that he will meet the army chief, Gen Ashfaq Parvez Kayani.

Ties between Islamabad and Washington are in crisis after American officials stepped up accusations that Pakistan’s Inter Services Intelligence was aiding insurgents in neighboring Afghanistan, including those who took part in an attack on the US Embassy last week in Kabul.