A Brazilian court has rejected a bid by academics, animal rights campaigners and environmentalists to have a chimpanzee who paints every day released from a zoo.

Jimmy, nicknamed the Cezanne of the Simians, has lived for around 12 years on his own in a 61 square metre cage at Niteroi Zoo, near Rio de Janeiro.

Last year a legal action to try to secure his freedom was launched with backers including the Great Ape Project (GAP), a Greenpeace representative and American academics.

They wanted to use the principle of Habeas corpus to have Jimmy, 27, freed and moved to live with other chimpanzees at a wildlife sanctuary in Sorocaba, Sao Paulo state, owned by Pedro Ynterian, international president of GAP.

But a court in Rio has now ruled that despite chimpanzees sharing 99.4 per cent of their DNA with people, Jimmy cannot qualify for Habeas corpus because he is not human.

Lawyers who acted for GAP said they would appeal to Brazil’s Supreme Court. 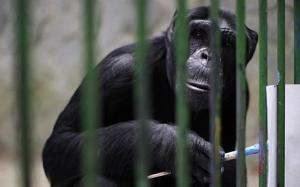