Societies are increasingly progressive; today, many people accept that love presents in many ways. So why do people still judge couples who are many years apart?

A viral chart from 2019 keeps popping up on social media: a graph detailing Leonardo DiCaprio’s dating history. A Reddit user had spotted a trend – although the actor was 44 at the time, he seemingly only dated women aged 25 or younger, always breaking up with partners before they reached their 26th birthday.

Responses to the chart were mixed; some commended DiCaprio for his ability to attract younger women, while others berated the veteran actor, begging him to find someone closer to his own age. Even at three years old, the chart continues to resurface, as commentators keep a keen eye on DiCaprio’s current relationship with 24-year-old Camila Morrone.

The reactions to the actor’s dating habits embody the contentious views surrounding age-gap relationships – for some, they are a source of admiration, while for others, there is something inherently unsettling about coupling up with a much younger person.

From Demi Moore and Ashton Kutcher, to George and Amal Clooney, high-profile age-gap relationships have always set tongues wagging. Although in 2014 the average age difference in US heterosexual relationships was a relatively small 2.3 years, many couples have a much wider gap. In Western countries, around 8% of male-female couples have an age-gap of 10 years or more, rising to 25% in male-male unions and 15% of female-female relationships. For some the gap is even larger – data suggests that around 1% of heterosexual couples in the US have an age difference of 28 years or more.

Our views around age-gap relationships are shaped by thousands of years of evolutionary psychology, and generations of social and cultural norms. Within the last hundred years, economic shifts and increased gender equalities have changed what is considered a ‘normal’ age-gap, and recent social justice movements have increased scrutiny of power dynamics in mixed-age relationships. Couples with large age gaps often face judgement, and while some experts believe that this could be about to change, others argue that young people could be becoming more disapproving of mixed-age love than ever before.

Those who find DiCaprio’s dating habits distasteful aren’t without good reason. Aversions to age-gap relationships are very common and, like most taboos, they stem from thousands of years of evolution as well as more recent social and cultural cues.

“In many cultures, it is not considered acceptable to fall in love with someone who is much older or younger than you,” says Dr Elena Touroni, a consultant psychologist and co-founder of The Chelsea Psychology Clinic in London. “From an evolutionary perspective, the drive to have a family can have an impact on who we choose to have a relationship with – both from a biological perspective but also in the sense of both parents being alive to raise the child.”

In many cultures, it is not considered acceptable to fall in love with someone who is much older or younger than you – Dr Elena Touroni

For both men and women, fertility tends to decline after the age of about 35, and though women lose their ability to conceive much more rapidly, it makes sense that we’ve evolved to be attracted to people who are similarly aged. Although there is relatively little data on age in LGBTQ+ relationships, we know that age-gaps among same-sex couples are much more common, perhaps reflecting how much the ability to biologically conceive together influences how we approach finding a partner.

It’s not just about parenting, however. Pairing up with someone of a similar age makes your relationship more likely to go the distance, research shows. Experts believe that this is because these couples tend to go through life challenges and stages at a similar time, and can therefore continue to find common ground.

“In the initial 10 years of marriage, people report higher levels of marital satisfaction when their partner is younger than them,” says Grace Lordan, an associate professor of behavioural science at the London School of Economics, who is currently researching age-gap relationships and happiness. “However, over time, the marital satisfaction of different-aged couples declines more than similar-aged partners. The probability of similar-aged couples divorcing is also lower.”

Yet despite these factors nudging us towards partners of the same age, socio-economic circumstances can sometimes counteract evolutionary urges. In 1900, the average age-gap between couples was about double the gap in 2000;  historically people (particularly those in the middle- and upper-classes) would have been much more likely to marry someone far older or younger than them.

The reasons for this are both biological and economic. If a 50-year-old man wants to have children, it is not in his interest to couple up with a similarly-aged woman who is much less likely to still be fertile. In a patriarchal society in which men have the economic power, the choice to pair up with a much younger woman would be more likely to be available to him.

In the 19th and early 20th Centuries, most women were excluded from the workforce, so it made sense for them to prioritise marrying someone who had already achieved financial security. For men, it made sense to establish themselves economically and worry about marriage at a later date – when due to their increased social power they were able to find younger wives who provided the best chance of having children.

Whom we judge and why

As women have gained greater economic power, however, the appeal of a much-older spouse has fallen, making age-gap relationships less common – and often more taboo.

These days, even as most societies embrace increasingly progressive views on love, relationships and the rich variety of ways they can present, couples where one person is much older than the other still face judgement. Rather than assume people are happily together, there’s a tendency to worry about possible power imbalances, and view the relationship as transactional, assuming one party is seeking to elevate their social status or wealth. There’s even specific vocabulary to aid that judgement; an older man must be a ‘sugar daddy’, a younger woman a ‘gold-digger’ or victim of ‘daddy issues’. 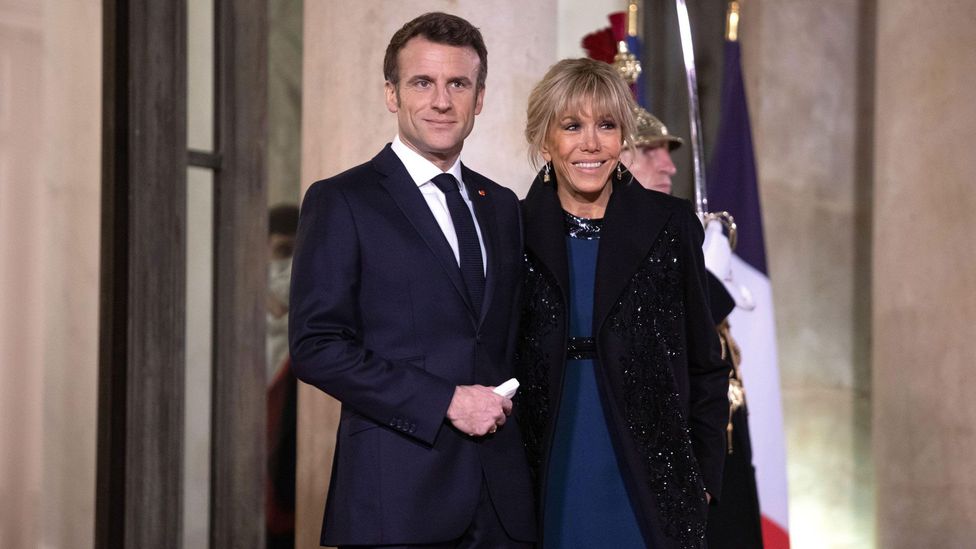 The relationship between Emmanuel and Brigitte Macron, married since 2007, has been scrutinised in the media (Credit: Alamy)

In recent years, that vocabulary has been expanded to include relationships in which women are the significantly older partner; words like ‘cougars’ and ‘toyboys’ reflect the rise in this kind of relationship. Statistics show that in 1963 just 15% of UK brides were older than their grooms. By 1998, this had risen to 26%, and findings from one 2011 study suggested that the number of women married or cohabiting with a man five years or younger had almost tripled since the 1970s.

Women who choose to date younger men seem to face a disproportionate amount of judgement. “Us humans are judgemental, and if what our neighbour is doing is misaligned with what we expect, we put a spotlight on it,” says Lordan. “Women who match with younger men go most against the grain when it comes to our narrative of marriage, and so suffer the most judgement.”

The media attention that surrounded French President Emmanuel Macron’s marriage to a woman 24 years his senior, or the fevered coverage of 41-year-old Kim Kardashian’s relationship with 28-year-old Pete Davidson only underlines this. Yet Touroni believes that older men/younger women relationships are now perceived with even more judgement than older women/younger men couples.

This is perhaps in part linked to the #MeToo movement, which placed increased attention on power dynamics in relationships. Some argue a significant age-gap, combined with the social and economic power that men wield in a male-dominated society, can leave young women in a vulnerable position. One study conducted shortly after #MeToo took hold shows that many outsiders believe that there’s an aspect of exploitation in age-gap relationships. Researchers found young people were particularly averse to relationships in which the male partner was older, and posited this was because they assumed that the relationship was exchange-based – for example, that people were exchanging sex for a certain lifestyle.

Will the age-gap taboo disappear?

Today, there is an increased acceptance that all relationships look different – whether this relates to sexuality, gender or even the number of people in the same relationship.

Us humans are judgemental, and if what our neighbour is doing is misaligned with what we expect, we put a spotlight on it – Grace Lordan

Touroni says as more kinds of relationships are normalised, she hopes that people will respect the choices of those in age-gap relationships. “We are living in an era of more freedom and flexibility, so I would like to think that over time we will become significantly less judgemental about other people’s relationship choices, whether that’s age-gaps or anything else.”

Yet there’s little evidence that society’s fascination with age-gaps is lessening. So-called May-to-December celebrity love affairs still regularly make headlines, and young people seem even more judgemental of age-gap relationships than their older counterparts, particularly when a man is older than a female partner. Given that young people are generally at the forefront of social changes, their disapproval could mean that the age-gap taboo might become even more deeply entrenched.

“Overall, I do hold out hope that we are becoming less judgemental of others, whatever their choices are,” says Lordan. “But the narratives of what a ‘good’ relationship looks like are so hard-wired in Western society, it is unlikely that we will reach a place where people stop judging the lifestyle choices of others that go against these norms, including age-gap couples.”