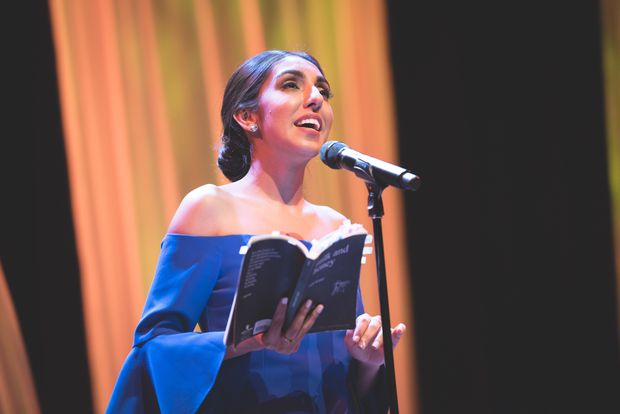 At the Rose Theatre in Brampton on Thursday April 26th

On Thursday night Aril 26th, in Brampton, Rupi Kaur returned to the same stage she’d walked across at her high-school graduation. Instead of a diploma, she now held her two books of bestselling poetry and the attention of 800 people – mostly women in their early to mid-20s, who cooed over Kaur’s every word, applauded after each poem (even if the poem was just one line) and traded, in awed whispers, sentiments like “This is so true.”

Standing inside a circle of flower petals, Kaur performed a generous selection of poems from her second collection, the sun and her flowers, a mainstay of bestseller lists since its publication in October 2017. Her 90-minute set also included material from its predecessor, milk and honey, which has sold more than three million copies. The homecoming was triumphal for both Kaur and Brampton, her first GTA date since the book’s commercial explosion. The return to her city – and the large contingent of her friends and family in the crowd – let Kaur relax back into her hometown persona, dropping local references to Costco and SilverCity, names that didn’t always garner laughs of recognition during her nine-month international tour.

The performance was in celebration of Sikh Heritage Month – Kaur’s second time participating in the event – as well as her induction into the Brampton Arts Walk of Fame. She is in esteemed company: The other 2017 Walk of Fame inductees are Director X (director of music videos for Kendrick Lamar and Drake, among others); Zarqa Nawaz (creator of Little Mosque on the Prairie) and the late William Perkins Bull, a historian of Peel County. Brendan Healy, the Rose Theatre’s artistic director, praised Brampton’s diverse young creators as a community of “doers,” amid which Rupi Kaur is “exceptional, but not the exception.”

The stage setup was minimal – a series of sheets cascading to the floor behind the poet; her feet ringed by flower petals – allowing Kaur’s confidence to come to the fore. Onstage, she switches between slam-poet theatrics – swaying body, spiralling hands, a vocal intonation that’s all breath and artful rasp – and more casual, between-poems banter that expands on the themes of her work: love, loss, trauma, femininity and migration. The spoken-word affectations sometimes feel misplaced, given that the genre is built on an attention to sound and rhythm, and Kaur’s work spends little time on either.

The accessibility of Kaur’s work is tied to her rise as a social-media celebrity. Kaur is at the forefront of a successful wave of “Instapoets,” young writers who use a tightly curated Instagram presence to popularize their writing. The platform dictates the form, with the poems engineered for easy reading and the quick click of a “like.” Today, Kaur boasts an Instagram following of 2.5 million, who flock to her shows in impressive numbers. She has toured often enough to have developed a seasoned stage persona, even if it doesn’t always suit the poetry.

The return to her city – and the large contingent of her friends and family in the crowd – let Kaur relax back into her hometown persona.

Her style is one of simplicity, a direct emotional transfer devoid of artifice or form. On the page, Kaur is spare and conversational, striving for aphoristic status. Speaking with The Globe and Mail in October, she touched on the pride she takes in producing relatable work: “No matter where I am, folks always tell me that ‘You put the words to this feeling that I’ve always had, that I didn’t really know how to define.’” The audience’s engagement backs this up – few lines were delivered without calling forth claps, snaps and mmhms.

But simplicity, without more attention to craft, can blur the line between universal truth and flat-out cliché: “Perhaps we are all immigrants.” “Sex takes the consent of two.” One poem, from the sun and her flowers, reads in its entirety: “the irony of loneliness / is we all feel it / at the same time.” It’s a simple observation that masquerades as depth, the chasm made more conspicuous by the language’s lack of adornment. Relatability has made her Canada’s most successful poet, but also its most criticized. Kaur further undercuts herself with what has become her trademark move – a final line that names a poem’s topic. Words like “closure,” “sex” or “together” (from the piece on loneliness) appear at poem’s end like a hashtag. If part of poetry’s magic is to render the quotidian in ways both beautiful and strange, then buttoning each piece with a statement of purpose feels a bit like telling a joke and then explaining the punchline.

This prosaic explication is more noticeable in performance. Kaur extemporized a few paragraphs about the insidious power of negative thinking before reciting the following: “I hear a thousand kind words about me / and it makes no difference / yet I hear one insult / and all confidence shatters.” The introduction contained most of the same phrases – it was just twice as long.

In a defence of Kaur in The Puritan magazine, Brooke Clark leans hard on context; the question of how we adjust our aesthetic judgments whether something is printed on a page versus, say, an accent pillow. In the performance context, Kaur’s devotion to her work is clear. Hers is a compelling and practised stage presence – she has better mic technique than most vocalists – but the belated imposition of rhythm does little to mask the poems’ compositional style. Yet her audience is content to look past this mismatch, championing her self-revelatory work as a surface in which they can see and find themselves.