On 28.04.2018 it was an extremely inspiring and motivational atmosphere at departure lounge of Frankfurt International Airport. A team provided by Muslim Ahmadiyya Medical Association MAMO, comprising of  Dr Mohammad Mohsin Bhatti, Doctor Irfan Azam, Dr Hafiz Slman Ahmad Rana and Tariq Karim Arif of Humanity First Germany were geared up to fly to Madagascar in order to conduct various medical aid camps as part of humanitarian projects of Humanity first Germany. Enthusiasm and devotion to serve the mankind was visible on the faces of all team members. Chairman Humanity first  Germany Muhammad Athar Zubair along with President MAMO Dr Mohammad Sarfraz Baloch, General Secretary MAMO and Doctor Wajahat Warraich were present to say good bye to the team. 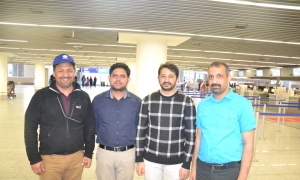 Team of Doctors and HFD representative going to serve the Humanity

MAMO is also active to acquaint the members of the society about first aid as well how to react in case of emergency. On 29.04.2018 as well on 01.05.2018 it is presenting a useful talk for the participants of Ansarullah Ilaqai Ijtema being organised in Neuess and Nasir Bagh-Gross-Gerau.  Doctor Ghalib Shaikh and Dr Mukarram Rana will be conducting these presentations on behalf of MAMO. 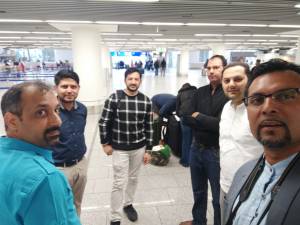 Team members and office bearers in action to take off for the project.