“Indeed, Islam rests on the foundation of Tauheed, the oneness of God, oneness of universe and oneness of mankind with liberty and justice. If Quran, the holy book of Muslims can be summed up in one word, it would be justice.” Quote from this article 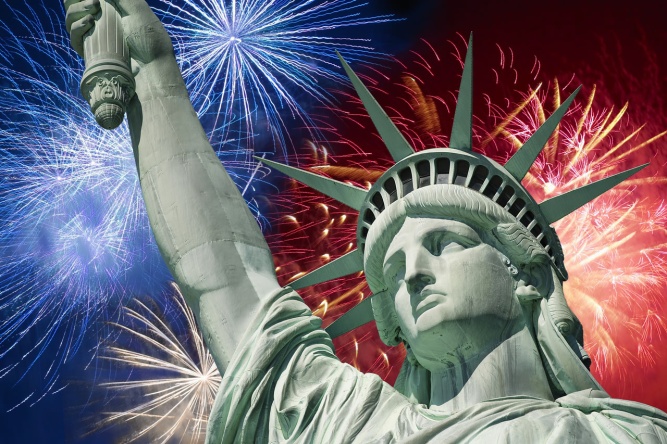 Freedom is one of the most cherished values of humanity and I am pleased to share its arrangement in American and Islamic space. Both emphasize the freedom of conscience, justice and liberty.

Please be aware that a few men in Islam, America and other religions don’t live up to the ideals of their own faith and they usually dictate the silent majority.

The very first step on American soil puts a smile on an immigrant’s face; if not you, it has happened to your parents, grand or great grandparents. It’s the same exuberance you witness on a baby’s face when she stands up for the first time, same exhilaration when a toddler eats the food on his own for the first time or the freedom written all over the face of a student when he or she graduates from school. Indeed, that was my feeling when I walked in to the Immigration center at JFK Airport some thirty years ago.

The next step for an immigrant is to earn his or her Citizenship and take the pledge, “I pledge allegiance to the Flag of the United States of America and to the Republic for which it stands, one Nation under God, indivisible, with liberty and justice for all.”

Reciting, “One Nation under God, indivisible, with liberty and justice for all” is like coming home for Muslims. Indeed, Islam rests on the foundation of Tauheed, the oneness of God, oneness of universe and oneness of mankind with liberty and justice. If Quran, the holy book of Muslims can be summed up in one word, it would be justice. Justice imbues a sense of security and trust among people leading to peace and prosperity. Our country started out with the constitution that no other nation on the earth had done before.

Not a day goes by for Muslims without expressing their gratitude for the first Amendment, “Congress shall make no law respecting an establishment of religion, or prohibiting the free exercise thereof; or abridging the freedom of speech, or of the press; or the right of the people peaceably to assemble, and to petition the Government for a redress of grievances.” Muslims cherish this freedom and see the corollaries in Quran and strongly wish that the Muslim nations follow the Madinah treaty where Jews, Christians and others were treated as one community; the treaty reads the Jews have their own religion as Muslims have their own to practice. The Conditions of peace and war and the accompanying ease or hardships must be fair and equitable to all citizens alike. A Believer will not make the freedman of another Believer as his ally against the wishes of the other Believers.

Quran declares in 2:256, “There shall be no compulsion in matters of faith” one is free to believe and practice his or her own faith as he or she chooses to. In verse 6 chapter 109 of Quran, the guidance on conducting a civil dialogue is concluded with, “Unto you, your moral law, and unto me, mine.” In essence the faith is in the heart of the believer as beauty is in the eyes of the beholder. It is respecting the otherness of other in America that Muslims honor every day.

As American Muslims, “We hold these truths to be self-evident, that all men are created equal, that they are endowed by their Creator with certain unalienable rights that among these are Life, Liberty and the pursuit of Happiness.”

American Laws holds the criminals individually responsible for their crimes; it is your heinie that is hauled off to the jail. You parents, siblings, spouse, kids, community or religion are not responsible for your actions. Muslims know that well, on the Day of Judgment you stand alone with your deeds, the good things you have done to fellow beings count in your favor, while your parents, spouse, kids and leaders will be busy with their own accountability. You are on your own!

The Prophet tells his own daughter that she will not get a free pass to paradise because she is a daughter of the prophet; she has to earn it on her own through good deeds to fellow beings, such is the emphasis placed on individual responsibility.

“You are innocent until proven guilty” sounds like a verse from Quran. An observant Muslim recites that God alone is the judge and we must refrain from judging others, they do that at least 17 times a day and some do it 51 times. Muslims love the wholesomeness of Justice and they love America.

I urge our politicians to stop playing one American against the other and instead commit to building a Cohesive America where no American has to live in apprehension of the other.

God Bless America and God bless our men and women in the uniforms protecting our freedom.

Mike Ghouse is a speaker, thinker, writer and a frequent guest on Hannity show and nationally syndicated Radio shows and Dallas TV, Radio and Print Media. He presides America Together Foundation and is committed to building a cohesive America and offers pluralistic solutions on issues of the day. Over 1000 articles have been published on Pluralism, Interfaith, Islam, India and cohesive societies. Two of his books are poised to be released this fall on Pluralism and Islam. He is available to speak at your place of worship, work, school, college, seminars or conferences. His work is encapsulated in 27 blogs, four websites and several forums indexed at mikeghousedotnet.