A Simple Recipe to Unite All Muslims

We in the Muslim Times weep and cry for loss of every human life, Muslim or non-Muslim, Sunni or Shia and Theist or Atheist

I am a Muslim brought up in Sunni tradition.  Growing up in Pakistan, I have a few relatives, who are Shia Muslims and have attended a few of Shia gatherings during the month of Muharram during my childhood, but, never had a detailed understanding or study of the different sects in Shia Islam.

I did not understand the precise details of how they came about, until I came across two very simple pictures in Wikipedia below.

My country of birth showed me the problems of divisions that the Muslim societies have and my country of immigration USA, which I adopted in 1989, has shown me the solutions.

A picture is worth a thousand words and the two pictures below reveal in a minute the divisions that came about, among the Shia Muslims over the centuries: 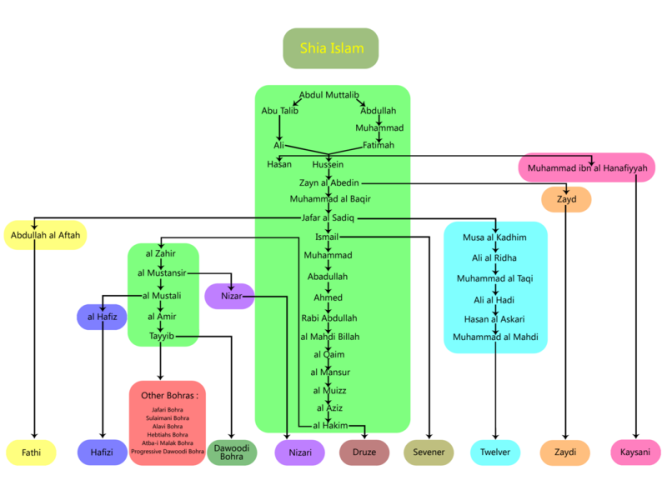 These pictures give me confidence that I can easily and quickly grasp the important demographics if not the theological and leadership issues of the different sects of Shia Islam.

I believe that both the Shia and the Sunni communities have equally failed to address the challenges of the modern times. Half of the Syrian population is today homeless, regardless of whose fault it is, the fact remains that Syria was not ready for the challenge. Yemen is being bombed by Saudi Arabia and some real or impending catastrophe can be highlighted from almost every Muslim majority country.

But, I am picking up the Shia example for the purposes of this article as their leadership model provides an easy metaphor for me to illustrate, what I want to say today.

Almost every Shia sect believes that their individual leader is infallible, like the Catholics did for centuries regarding their popes, until the Protestant revolution in the sixteenth century, may be they still do but that is not my focus here.

My point is that majority of the Shia Muslims believe their individual leaders to be infallible and yet the Shia community as a whole is all so divided and the Muslims in general are in such a sorry state in the 21st century and an easy prey for every one. So, it is almost self evident to a large majority of the world population, who are not Shia, shall I say almost 97.5% of the seven billion inhabitants that these Shia leaders are not infallible.

For centuries the Muslims have been asking the wrong questions, which in my view is more clearly obvious in the Shia Muslim history, which indirectly shows the errors of the Sunni ways also, in the failure of the Muslims to unite mankind in pursuits of common good, like the West has done in the last five centuries.

If we ask the wrong questions answers do not matter.

To illustrate my case, I realized that I need to grasp the important details of the three large groups, among the Shia Muslims, the Twelvers, Islamilis and Zaidis to make my case.  Wikipedia helped out again.

Below are the some details about Shia Islam and the three large groups among them.

Shia (/ˈʃiːə/; Arabic: شيعة‎‎ Shīʿah, from Shīʻatu ʻAlī, followers of Ali) is a branch of Islam which holds that the Islamic Prophet Muhammad designated Ali ibn Abi Talib as his successor (Caliph).[1] Shia Islam primarily contrasts with Sunni Islam, whose adherents believe that Muhammad did not appoint a successor. Instead they consider Abu Bakr (who was appointed Caliph through a Shura, i.e. consensus) to be the correct Caliph.[2]

Shia Islam is the second-largest branch of Islam: in 2009, Shia Muslims constituted 10–13% of the world’s Muslim population.[4] Twelver Shia (Ithnā’ashariyyah) is the largest branch of Shia Islam.[5] In 2012 it was estimated that perhaps 85 percent of Shias were Twelvers and a very large part of Iran population will fall under this category.[6]

Shia Islam is based on the Quran and the message of the Islamic Prophet Muhammad attested in hadith, and on hadith taught by their Imams.[7][8] Shia consider Ali to have been divinely appointed as the successor to Muhammad, and as the first Imam. The Shia also extend this “Imami” doctrine to Muhammad’s family, the Ahl al-Bayt (“the People of the House”), and some individuals among his descendants, known as Imams, who they believe possess special spiritual and political authority over the community, infallibility, and other divinely-ordained traits.[9]

Although there are myriad Shia subsects, modern Shia Islam has been divided into three main groupings: Twelvers, Ismailis and Zaidis, with Twelver Shia being the largest and most influential group among Shia.[10][11][12]

Ismāʿīlism is a branch of Shia Islam.[1] The Ismāʿīlī (/ˌɪsmeɪˈɪli/[2]) get their name from their acceptance of Imam Isma’il ibn Jafar as the appointed spiritual successor (Imām) to Ja’far al-Sadiq, wherein they differ from the Twelvers who accept Musa al-Kadhim, younger brother of Isma’il, as the true Imām.[3]

Tracing its earliest theology to the lifetime of Muhammad, Ismailism rose at one point to become the largest branch of Shī‘ism, climaxing as a political power with the Fatimid Caliphate in the tenth through twelfth centuries. Ismailis believe in the oneness of God, as well as the closing of divine revelation with Muhammad, whom they see as “the final Prophet and Messenger of God to all humanity”. The Ismāʿīlī and the Twelvers both accept the same initial Imams from the descendants of Muhammad through his daughter Fatimah and therefore share much of their early history. Both groups see the family of Muhammad (the Ahl al-Bayt) as divinely chosen, infallible (ismah), and guided by God to lead the Islamic community (Ummah), a belief that distinguishes them from the majority Sunni branch of Islam.

In recent centuries Ismāʿīlīs have largely been a Pakistani, Afghan, and Indian community, but Ismailis are also found in Bangladesh, Syria, Iran, Saudi Arabia, Yemen, Jordan, Iraq, East Africa, Angola, Lebanon, and South Africa, and have in recent years emigrated to Europe, Canada, Australia, New Zealand, the United States, and Trinidad and Tobago. There are also a significant number of Ismāʿīlīs in Central Asia.

Zaidiyyah or Zaidism (Arabic: الزيدية‎‎ az-zaydiyya, adjective form Zaidi or Zaydi) is a liberal and moderate early sect which emerged in the eighth century out of Shi’a Islam.[1] Zaidis are named after Zayd ibn ʻAlī, the grandson of Husayn ibn ʻAlī who they recognize as the fifth Imam.[1] Followers of the Zaydi Islamic jurisprudence are called Zaydi Shi’a and make up about 35-40% of Muslims in Yemen.[2] Zaidis dismiss religious dissimulation (taqiyya).[1]

The Zaydi madhab emerged in reverence of Zayd’s failed uprising against the Ummayad Caliph, Hisham ibn Abd al-Malik (ruling 724-743 AD), which set a precedent for revolution against corrupt rulers. It might be said that Zaydis find it difficult to remain passive in an unjust world, or in the words of a modern influential Zaydi leader, Hussein Badreddin al-Houthi, to ‘sit in their houses’.[3]

Zaydis were the oldest branch of the Shia and the largest group amongst the Shia before the Safavid Dynasty in the sixteenth century and are currently the second largest group. Zaidis do not believe in the infallibility of Imāms, but promote their leadership and divine inspiration.[4]

So now that we understand how the Shia Muslims came to be different, the key question is what can unite all the Muslims together?

As we noted before, if we ask the wrong questions answers do not matter. Asking the wrong questions leads to sectarianism if not civil wars in the Muslim countries or among them like Iran or Iraq war and now Saudi Arabia versus Iran regional conflict.

If history is any guide we can be certain that the Muslims cannot unite under one person or one dynasty, over time it only leads to inevitable divisions. But, we can unite on lasting principles, whether we borrow them from Islam or our observation of human history. After all the holy Quran does invite us to study and observe the fate of the past generations on several occasions.

We can learn from the history of the Catholic Church. For 1500 years they tried to unite the world of Christianity under the Papal leadership, moving from one terrible chapter of human exploitation of Crusades to one or the other form of Inquisitions, until the Protestant revolution by people like Martin Luther during the sixteenth century.  This led to centuries of armed struggle until the declaration of Independence in USA, which asked the right questions of human rights and just governance, rather than religious dogma, papal infallibility or Church’s bureaucracy.

The separation of church and state that followed also asked the right questions about the scope of religion, is it in governance and sectarianism or is it in finding only private piety and individual spirituality?

By asking the right questions about human dignity, freedom of conscience, universal brotherhood, women rights, secularism and absolute justice, the Muslims can unite in the public forum not only with each other but also the fellow non-Muslims, despite belonging to different understanding of faith and spiritual leadership of their choosing.

These are the real questions that we constantly address in the Muslim Times.

Michael Servetus: A Unitarian Martyr from the 16th Century

A Simple Recipe to Unite All Muslims https://t.co/c2kwvHGucA via @wordpressdotcom