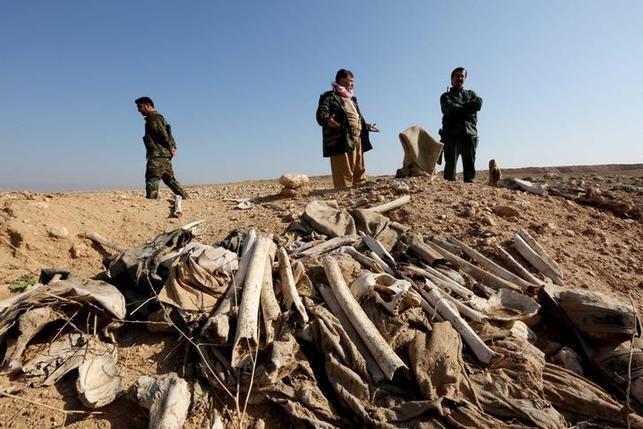 Bones, suspected to belong to members of Iraq’s Yazidi community, are seen in a mass grave on the outskirts of the town of Sinjar, November 30, 2015.
REUTERS/ARI JALAL/FILES

Islamic State is committing genocide against the Yazidis in Syria and Iraq to destroy the religious community of 400,000 people through killings, sexual slavery and other crimes, United Nations investigators said on Thursday.

Their report, based on interviews with dozens of survivors, said that the Islamist militants had been systematically rounding up Yazidis in Iraq and Syria since August 2014, seeking to “erase their identity” in a campaign that met the definition of the crime as defined under the 1948 Genocide Convention.

“The genocide of the Yazidis is ongoing,” it said.

The 40-page report, entitled “They Came to Destroy: ISIS Crimes against the Yazidis”, sets out a legal analysis of Islamic State intent and conduct aimed at wiping out the Kurdish-speaking group, whom the Sunni Muslim Arab militants view as infidels and “devil-worshippers”.

The Yazidis are a religious sect whose beliefs combine elements of several ancient Middle Eastern religions.

“The finding of genocide must trigger much more assertive action at the political level, including at the (U.N.) Security Council,” Paulo Pinheiro, chairman of the commission of inquiry, told a news briefing.

Commission member Vitit Muntarbhorn said it had “detailed information on places, violations and names of the perpetrators”, and had begun sharing information with some national authorities seeking to prosecute foreign fighters.

The four independent commissioners urged major powers to rescue at least 3,200 women and children still held by Islamic State (IS or ISIS) and to refer the case to the International Criminal Court (ICC) for prosecution.

“ISIS made no secret of its intent to destroy the Yazidis of Sinjar, and that is one of the elements that allowed us to conclude their actions amount to genocide,” said another investigator, Carla del Ponte.

“Of course, we regard that as a road map for prosecution, for future prosecution. I hope that the Security Council will do it because it is time now to start to obtain justice for the victims,” added del Ponte, a former U.N. war crimes prosecutor.

Islamic State, which has proclaimed a theocratic caliphate – based on a radical interpretation of Sunni Islam – in areas of Iraq and Syria under its control, systematically killed, captured or enslaved thousands of Yazidis when it overran the town of Sinjar in northern Iraq in August 2014.

At least 30 mass graves have been uncovered, the report said, calling for further investigations.

Islamic State has tried to erase the Yazidis’ identity by forcing men to choose between conversion to Islam and death, raping girls as young as nine, selling women at slave markets, and drafting boys to fight, the U.N. report said.

Yazidi women are treated as “chattel” at slave markets in Raqqa, Homs and other locations, and some are sold back to their families for $10,000 to $40,000 after captivity and multiple rapes, according to the report.

“No other religious group present in ISIS-controlled areas of Syria and Iraq has been subjected to the destruction that the Yazidis have suffered,” the report added.