French secularism, or laïcité, treats religion as a dirty little secret, and manifests itself as a restriction of public prayer or the open expression of religious identity 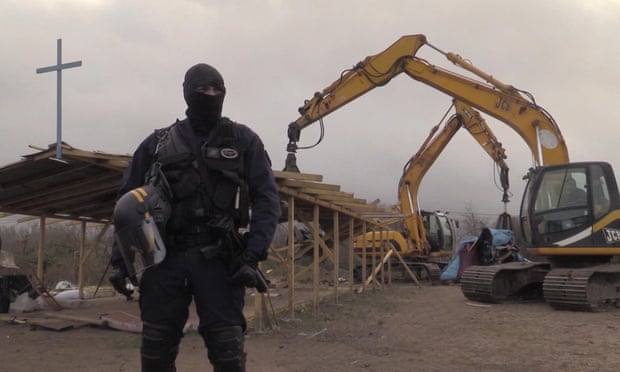 A policeman stands guard as a digger destroys a church at a migrant camp in Calais on 1 February 2016. ‘The Gallic Robocops trampled all over the church, treating it as of no more emotional consequence than the disgusting Portaloos they were also removing.’ Photograph: AP

On Monday morning, without warning, a group of heavily armed French police descended on the Calais refugee camp to flatten a 100-metre buffer zone between the camp and the motorway. A church and a mosque were torn down, despite promises that they wouldn’t be touched. It’s all part of a wider effort by the French authorities to shift refugees into a new camp of numbered shipping containers, surrounded by a large wire fence.

This new camp affords the French a greater degree of administrative control – with biometric handprints being introduced as passes – and sucks refugees further into the French system. This can be seen as a tacit acknowledgment that the French have responsibility for processing their asylum claims in France.

But why don’t the refugees want asylum in France? One reason is because many of them perceive Britain to have a stronger tradition of religious tolerance than France. And this often surprises the French, because they pride themselves on their much-discussed notion of laïcité – roughly, secularism plus – so sacred a notion that it’s enshrined in article one of the French constitution.

For its defenders, laïcité is a way of ensuring the state’s systematic blindness when it comes to religion. It is an official pretence not to notice whether or where somebody prays. For its detractors, this supposed neutrality is nothing of the sort, but rather a cover for the eradication of religious visibility, indeed religious rights, from the public sphere. This week, both Amnesty International andHuman Rights Watch condemned the French police’s human rights violations against Muslims.

Laïcité began as justification for eradicating the influence of the Catholic church – and involved the murder of thousands of priests during the revolution. It continues as a cover for discrimination against Muslims. It is no coincidence, for example, that the ban on the wearing of headscarves in public schools, a ban which also included Jewish boys wearing their kippot and Sikhs wearing their turbans, followed the electoral success of the far right in April 2002. Just as colour-blindness with respect to race is not the same thing as being anti-racist, so too laïcité is not the same thing as being anti-discriminatory. Indeed, this whole neutrality-as-blindness philosophy means that the French state won’t even collect statistics about ethnicity or religion, thus refusing to evaluate, or even face, the extent of their problem. For example, how many North Africans are there in top positions? The French state wont say. Indeed, it wont even ask.

And it’s this same official “blindness” that led the French police not to notice that the buildings they were destroying in Calais had any religious significance. As the Ethiopian pastor looked on, clutching a blue wooden cross he’d salvaged from the wreckage, the Gallic Robocops trampled all over his church, treating it as of no more emotional consequence than the disgusting Portaloos they were also removing. Religion’s comfortable despisers may sneer, but faith is one of the few things that people in the camp have to cling on to. Not noticing this is not a form of neutrality.

Secularism can mean many different things. For some it is the simple separation of church and state: no bishops in the House of Lords, no religion test for political office etc. For others, secularism is something much more: purging religion from the public sphere. It’s a bit like the Victorian attitude to sex: if you must do it, do it privately and don’t talk about it. Here, secularism treats religion as a dirty little secret, and manifests itself as a restriction of public prayer or the open expression of religious identity. And that’s about as neutral as the attitude to God taken by state communism.

In a recent survey in Le Journal du Dimanche, 56% of people said they would react badly if their daughter married a Muslim, 91% of people said that Jews in France “are very insular”, and 56% that they “have a lot of power”. State blindness isn’t helping. Laïcité doesn’t eradicate religious hatred. At best, it simply camouflages it. At worst, it provides it with an alibi.