Obama Visits Mosque In U.S. For First Time During His Presidency 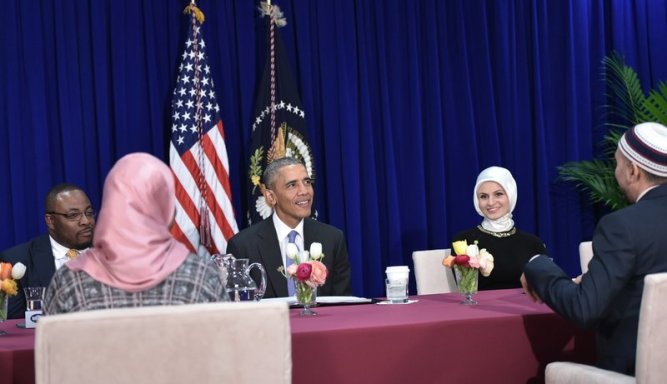 President Obama participates in a roundtable discussion with members of the Muslim community Wednesday while visiting the Islamic Society of Baltimore in Windsor Mill, Md.

President Obama is delivering remarks at a mosque in Baltimore on Wednesday afternoon, in the first visit to an American mosque he’s made during his presidency.

His visit, which will also include a roundtable with Muslim community members, is intended to “reaffirm the importance of religious freedom” to life in America, the White House says.

In his speech at the Islamic Society of Baltimore, the president is expected to say that rejecting bigotry is a core American value.

The president has visited mosques in other countries, but had not previously visited any in the U.S., The Associated Press reports. The wire service notes that Wednesday’s speech is one of several religiously themed visits he’s making this winter.

“He is set to speak to the nation’s Christian leaders at the annual National Prayer Breakfast on Thursday, and last week warned against the rise of religious intolerance during a ceremony at the Israeli Embassy,” the AP writes.

Visiting a mosque to reiterate America’s commitment to religious tolerance has a noteworthy precedent. Days after the terrorist attacks on Sept. 11, 2001, then-President George W. Bush visited the Islamic Center in Washington, D.C., to say that the intimidation of Muslims “should not and will not stand in America.”

“The face of terror is not the true faith of Islam,” Bush said. “That’s not what Islam is all about. Islam is peace.”