The Muslim world finds itself amidst a battle of two narratives — one of oppression and one of justice.

The oppressive narrative enforces death for blasphemy and/or apostasy and wants government that rejects the democratic ideal of separation of mosque and state. It relegates women to second class status and likewise, seeks to establish a Khalifa to unite Muslims in their oppressive cause.

The just narrative uses service to humanity and the pen to present Islam’s true essence. It presents no shortage of scholarly literature exists to repudiate oppressive interpretations of Islam; see this brilliant work by a twentieth century Islamic scholar and another brilliant work by a former UN President and President of the International Court of Justice. Likewise, the just narrative inspires Muslims to remain at the cutting edge of service to humanity through organizations like Humanity First and the “Muslims for Life” annual blood drive. It inspires women to pursue higher education and become leaders in science, scholarship, and yes, motherhood. This demonstrates that the justice based narrative is not just some theological exegesis of Qur’anic interpretation and theory, but instead it is based in hard reality. 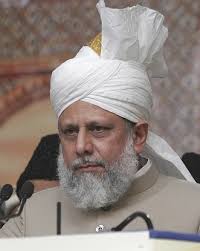