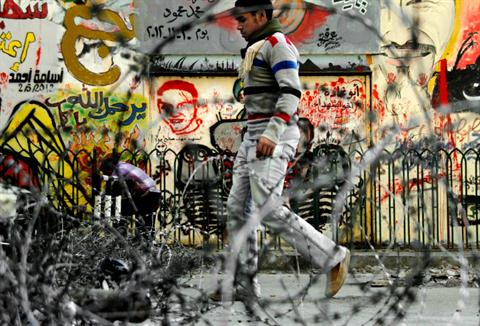 A man walks near barbed wire set up by protesters in Tahrir Square, the focal point of the Egyptian uprising, in Cairo, Sunday, Dec.16, 2012. Key Egyptian rights groups called Sunday for a repeat of the first round of the constitutional referendum, alleging the vote was marred by widespread violations. Islamists who back the disputed charter claimed they were in the lead with a majority of “yes” votes. (AP Photo/Amr Nabil)

Although only half way through Egypt’s constitutional “referendum,” it seems that even if only a fraction of the charges against the process turn out to be accurate, the vote is far from democratic.

The vast majority of judges boycotted the referendum, so most ballots were without neutral observation and rights groups have now alleged that some of those who identified themselves as judges Saturday actually presented false papers.

The lead up to the election had also paved the way for a rocky referendum, with violence between President Mohammad Mursi’s supporters and opponents leading to some 10 deaths and around 1,000 wounded.

Around 32 percent of people voted, after the first round, with a 56 percent majority.

The overwhelming majority of Egyptians does not want the new Constitution then, or does not feel well enough informed or motivated either way.