Total participation of the Jalsa this year included 523, male 266 and female 257. It has been increase 35% in participation compared to last year and it is a record for Singapore too. Most of the participants are from Indonesia. Other than that, there were considerable amount of participation from Malaysia, Cambodia, Thailand, Bangladesh and Myanmar. Some Pakistanis and Africans had attended too.

The very first session of the Jalsa was chaired by Maulana Abdul Basit Sb from Indonesia, one of the very prominent figure of Jamaat Indonesia. In the first session, the Message of Hadhrat Ameerul momineen, Khalifatul Mesih the Fifth was presented by Abdul Aziz sb, followed by a translation in Malay by Maulana Hasan Basri Sb, Missionary In-charge of Singapore.

It must not be a coincidence that as the topic of the first speech was The Holy Prophet (sa) – A Beacon of Human Values (In Malay Language) and it is the instruction described in Huzur’s Message specifically to highlight the Noble Character of our Prophet (sa) during these blessed days. The speech was very beautifully delivered by Maulana Ainul Yakin Sb, Missionary In-charge of Jamaat Ahmadiyya, Malaysia.

After refreshment, second speech was delivered in the topic of Tolerance, Respect and Harmony in the Holy Quran (Malay) by Maulana Hasan Basri of Singapore.

On second day, the chairman of the Jalsa was Maulana Ainul Yakin Sb of Malaysia. Two speeches were delivered in Malay. Topics are Consequences of Rejecting the Imam Mahdi and The Promised Messiah (as) – His Loyalty and Obedience to the Holy Prophet (sa). The former was delivered by Maulana Syaeful Uyun and the later was by Maulana Ataul Mujeeb YA.

After lunch and Zuhur and Asr Prayers, the third session was started and chaired by Dr. Ifthikar Ayaz Sb of UK. 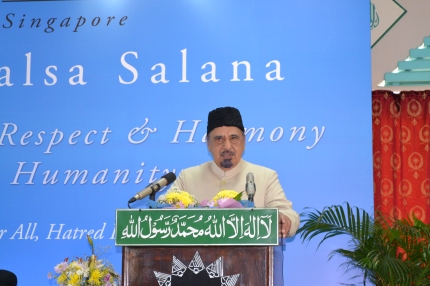 In which, two speeches were delivered in English. The first topic was The Renaissance of Islam by Maulana Ataul Qudus of Singapore and the second was Islam Ahmadiyyat – A Beacon of truth or a Victim of Persecution by brother Ayaz Ahmad Sb.

After the speeches, there was an interview session with foreign VIP attendees.

On Sunday, the fourth session was chaired by Abdul Aziz Sb, President of Jamaat Singapore. The first topic of the speeches was The Death of Hadhrat Isa (as) – Crucial to Islam (Malay) and it was delivered by Ahmad bin Salleh Sb, a missionary and President of Jamaat Ahmadiyya, Cambodia.

It was followed by the second speech and topic was Democracy and Human Rights in Islam (English). This topic was very inspiringly delivered by our very special guest, Dr. Ifthikar Ayaz Sb (OBE) of UK. It grasps the whole figure of true Democracy in the light of Holy Quran and the noble practices of the Holy Prophet (sa). As the speech was so fruitful in knowledge, the audiences were enthusiastically paid attention to it.

After the final session, the speeches of guests and delegates were presented.

The first speech was delivered by the Director of Cabinet Minister of Culture and Religion of Cambodia in Cambodian Language. Simultaneous translation were done in Malay language. There was also the director of Religious affairs of Cambodia. (please refer to the name of the photos)

The second was by Mr. Ustaz Suryana who is the Chief of Pagar Akidah, Bandung in Indonesia.

The third was by Mr. Wawan Gunawan who is the Chief of Interfaith forum, Jaka Tarub, Bandung, Indonesia.

The fourth was by Mr. Fauz Noor who is the Chief of Pesentran “Fauzan” at Tasik Malaya, West Java.

And the fifth was by Mr. Kh Sayaeful Abdullah, Chief of front Umat Islam and Coordinator of Mubalighin Forum of Muhamadiah, West Java.

There was a guest from Qadian whose name is Gurdip Singh, a Journalist of Press Trust of India.

The final report was read by Dr. Mubarak Chaudry of Singapore who is the chairman of Jalsa Committee.

Source: As Reported by Nasir Ahmad and Tin Maung Htwe.