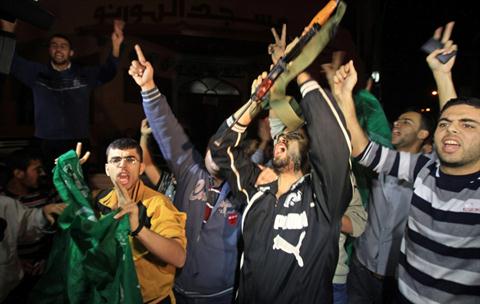 An Egyptian-brokered truce between Israel and Hamas Wednesday ended eight days of fierce fighting in Gaza, largely halting attacks that have killed 162 Palestinians and five Israelis and promising to discuss the easing of an Israeli blockade of the territory.

Hamas leader Khaled Meshaal said the deal included an agreement to open all border crossings with the Gaza Strip, including the important Rafah crossing with Egypt.

For Israel, it brings a halt to rocket fire and attempts at cross-border incursions from Gaza.

The deal was also unclear about a key Israeli demand for an end to arms smuggling into Gaza in tunnels underneath the border with Egypt.

It appeared aimed at sparking Israeli fears of a return to the violence of the Palestinian uprising last decade, which killed more than 1,000 Israelis in bombings and shooting attacks and left more than 5,000 Palestinians dead